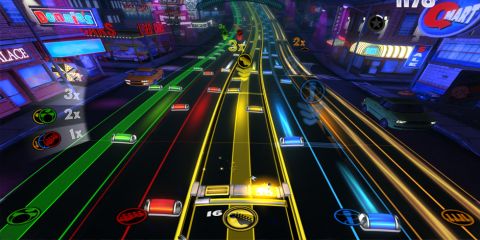 Rock Band Blitz is a bit like a wooden rollercoaster. When you first experience it, it’s thrilling--but with each repeated ride, it starts to feel less exciting and more rickety. The immediate comparison to make would be Harmonix’s 2001 PlayStation 2 breakout title FreQuency, and its fantastic 2003 follow-up Amplitude. Sadly, Rock Band Blitz’s fleeting fun falls short of the addictive arcade action of those titles.

The basic premise is simple enough: you’re a one-person band, juggling the multiple instruments that create each track by switching between adjacent note-filled lanes. Those plastic instruments you’ve got stashed in your closet will stay there: Blitz is played solely with a single controller, with your two thumbs tapping in time to the the two note receptors in each lane. The d-pad/A button combo is more comfortable than the analog stick option--clacking the twin sticks back and forth just doesn’t feel suited for a rhythm game.

In addition to the 25 included songs, which can all be played in Rock Band 3 and range from Ugh (Fall Out Boy’s “A Little Less Sixteen Candles”) to Righteous (“I’m Still Standing” by Elton John), you can boot up any preexisting DLC song on your hard drive and play it for points. Strangely, there’s no difficulty select--Blitz determines a challenge level for you, and you’re at its mercy if that song is brutally demanding.

This is where the game starts to feel a bit shaky: two-button jamming works great when you’re in the groove of a familiar song, but for more difficult levels or songs you’ve never heard, the hardest bits devolve into button mashing. Blitz doesn’t necessarily penalize you for this, since instead of chained note combos, it values the amount of notes played before seemingly random intervals. Once you pass through these intervals, Blitz checks to see if you’ve been properly tending to each track, and adjusts your multiplier accordingly.

There seems to be no strategy to prepping for these mid-song assessments; perhaps you're already familiar with the song and know when each break is coming, or you’ll be scrambling at the last second to meet your note quota. That’s a problem with a multi-track music game like this one: if you’re feeling the beat in a given lane, you’re inevitably going to be ripped out of your rhythm when you’re faced to fill in the other note paths.

But Harmonix's earlier games designed in this same vein felt much more satisfying than Blitz. Take Amplitude: instead of Blitz’s mundane cruises through uninteresting cityscapes in every single song, Amplitude gave you psychedelic visuals and clips from music videos. Amplitude’s individual tracks would only “activate” and play music if you’d successfully nailed their notes, giving you a natural incentive to bounce between lanes; Blitz places little emphasis on whether or not you’re doing well, and just plays the music for you.

Regrettably, one of Blitz’s best assets is also its primary weakness. There are a plethora of fun power-ups to unlock, which you can mix and match ‘til you’ve found your optimal set-up. They include beefed-up point values, spreading fire-notes, bouncing purple pinballs, and point-boosting shockwaves, and more. They’re all a blast to use; the problem is, they don’t last. Each time you play a song, you’ll need to spend “Blitz Coins” to use power-ups, a currency granted after each song or via Facebook-interconnected goals. They’re not microtransactions for real-world cash--but seeing as how it’s nearly impossible to get a good score without them, you’ll often be forced to farm coins just to compete with your buddy’s scores. It feels like the sort of grinding you’d find in free-to-play games, not in a title in this genre.

After nearly five years of investment in DLC for Rock Band as a platform, Rock Band Blitz offers up new means of playing all of the songs you've bought. But without a full-fledged campaign or multiplayer progression, chasing high scores on the Blitz leaderboards can’t help but feel a bit hollow. Although the premise is good, it ultimately falls short, and you might be better off just picking another instrument from your typical choice and rediscovering Rock Band with another play style.