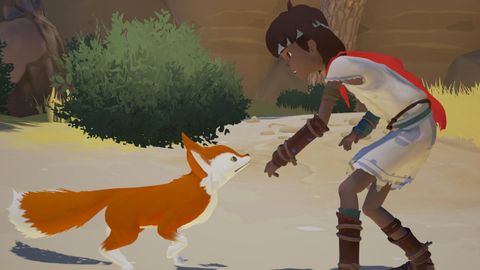 An intoxicating, memorable journey, with smart puzzles and a resonant story.

It's clear from the outset that Rime is special. With a slow, deliberate introduction, we meet a boy, washed ashore on a strange and unfamiliar beach with seemingly no memory of how he got there. A sweeping, beautiful soundtrack kicks in as the boy rises to his feet and takes his first, fragile steps. There's no tutorial, no exposition, just a skillfully directed welcome to this fantastical world and a vague sense of direction, your gut begging you to get out and explore.

This is Rime's biggest success: all of the above is driven by you wanting to see what's around every corner, by you wanting to get to that next aha! moment. There's no push from the game, only pull. Rime never tells you "go here, do this, in this order." Instead, it teases you with its mystery and trusts that you'll be curious enough to follow through.

One of the most refined ways the game achieves this is through its puzzles. These environmental challenges often revolve around manipulating objects or shifting your perspective. You might, for example, need to pull a block with a magical statue atop it close enough to a door so you can cause the door to open. Or, you might need to align a piece of scenery in such a way so that, when you stand at a designated spot, it combines with other pieces of architecture to form the shape of a key.

You'll see a thing, wonder ‘how do I get to that thing’, and then figure out the path. This means little to no friction between the large-scale goal you're trying to accomplish (explore the island) with the small-scale obstacles in your way. The few times I was left scratching my head, it wasn't long before I figured out I just had some nook or cranny I hadn't checked out and I was on my way. Rime is constantly reinforcing the idea of you figuring out your place on the island, both literally and figuratively.

There are no words to Rime's story, yet it is supremely adept at storytelling. Flashback cutscenes are as explicit as things get, with the large majority of what's happening and why being left up to your interpretation, informed only by visual cues in the environment and the behavior of shadowy creatures. Save for an emotional conclusion, you get out of Rime's plot what you put into deciphering it.

Not everything is perfect in this magical oasis, though. While the lands you'll travel are beautiful and well-realized, they're not as accessible as you might imagine. You can only grasp or climb certain ledges, even when it looks like you should be able to reach a different one. The boy himself is expressive and detailed (to the point he trembles when cold and his voice changes based on context) but his movement, particularly jumping, can sometimes feel stilted.

I missed a handful of jumps I felt I should've made or failed to interact with an object because I wasn't facing the exact right direction or wasn't quite close enough, respectively. It was never particularly frustrating because it was A) not a common occurrence, and B) even when I fell to my death, I was respawned right back where I needed to be without a wait. Still, it was noticed.

I also noticed some framerate hiccups and occasional slowdown. Again, most of the time this wasn't an issue, but every now and then I'd enter a passage or climb a hill and notice some choppiness. Rime's world is so beautiful, you'll want to see it render as smooth as possible, and it's a bit frustrating when it doesn't.

That being said, these aren't the kind of flaws that make Rime unplayable or even unpleasant. The modicum of frustration imposed by these technical failings is negligible compared to the constant sense of satisfaction it offers. Every time you solve a puzzle, uncover a secret passage, or collect a hidden trinket, you feel all the more clever because you saw the hint of something bigger and wanted to figure it out. You saw a path and wanted to see where it led.

And when you get to the end, you'll know it was a special journey.

Rime review: "There's no push from the game, only pull"

An intoxicating, memorable journey, with smart puzzles and a resonant story.