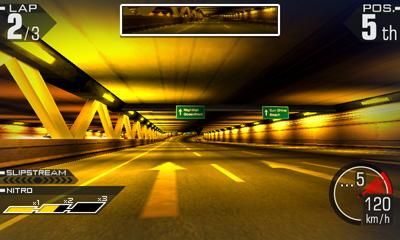 Much like the turning of the earth and the Dynasty Warriors series, the Ridge Racer franchise quietly continues its endless cycle, though we may, at times, forget to notice it. The Ridge Racer series made its name on the strength of its solid arcade racing debut on the PSOne launch all the way back in 1995. The series debut on the 3DS doesn’t offer any revolutions in gameplay, but it makes good use of the new 3D technology and captures the core arcade racing fun the franchise is known for.

The first thing you notice is RR3D’s 3D effect. Initially it’s disorienting, but works quite well once your eyes settle into it. It also requires you to look beyond your car; if you try staring directly at your vehicle, prepare for an eyeball crossing headache. It’s odd that for the effect to work your car needs to become a secondary visual cue to the roads themselves, but looking at the horizon actually benefits your racing; the effect draws you into the screen and helps you focus solely on the road. The first person bumper cam puts you closer to the road, but the effect is slightly less pronounced. Of the 3DS games I’ve played, this effect is one of the only ones that enhances the game and doesn’t feel gimmicky.

Ridge Racer 3D handles well enough, clinging tightly to the “No Braking Allowed Treaty” that was ratified by the League of Arcade Racing Games back in 1995. Let off the gas while turning and the car goes into a drift, steer further in a direction and it drifts more drastically. Even the tightest hairpin can be negotiated without even looking at the brake button. There’s a manual shift mode for players who feel compelled to press more buttons, though it doesn’t do much to increase the performance of the vehicles.

As with its predecessors, Ridge Racer sticks to custom unlicensed cars that run the gamut from exotic looking sports cars to huge finned Cadillac clones. The different makes encourage different driving styles, primarily by encouraging or dissuading drifting. Cars tend to fall into the Goldilocks school of thought: some cars drift too much, others don’t drift enough and some drift just right. The game’s forgiving physics prevents cars from ever fully spinning 180 degrees though, so using the squirrely mega drifters isn’t a huge problem. Especially since excessive drifting quickly boosts your nitrous gauge.

The game’s user friendly physics make it almost impossible to completely lose it in a turn. I found myself drifting completely the wrong direction into an extremely tight turn and the game completely changed my momentum, sort of putting me on rails for a moment to get me through it. It may feel strange, but it keeps your speed up and the game moving for entertainment's sake.

Similar to a lot of other arcade and kart racers, Ridge Racer 3DS features noticeable rubber banding in the AI; cars wait up for you if you’re behind, and seem programmed to stay in front of you depending on the lap. I had a brief chat with a co-worker during a race and absent-mindedly forgot to pause the game. I resumed the race about 20 seconds later in last place yet somehow passed the next closest driver after one turn. I can only imagine that he too was having a short conversation with a coworker. Fortunately, the rubber-banding doesn’t work in reverse, once you’ve pulled into first you’ll usually be able to stay there barring any major mistakes.

The game does suffer from an unnecessarily long set of races in the initial Category 4 machines which are substantially slower and less fun to play. Ridge Racer has always been about break neck racing, and forcing the player to complete roughly 30 races before unlocking the much faster, more entertaining category 3 cars is a misstep.

Ridge Racer 3D isn’t helped by the fact it offers little in the way of gameplay options, you’re limited to standard races vs the A.I. and other players in Grand Prix, Quick Tour, Standard and One Make, while Time Trial is just you versus the clock. The StreetPass feature allows you to swap lap times with people you meet on the street. Unfortunately, the game is limited to local wireless play only, a large shortcoming in a game with so few ways to play.

Ridge Racer 3D offers a fundamentally solid, entertaining arcade driving experience. Its 3D effect is well done and benefits the player, but it does little to mask the simple core and bare bones presentation.

Down are up ell, ex why be?
See comments