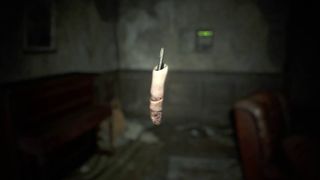 You know it, you love it, you hate it, it's the finger from the very first Resident Evil 7 demo. This plastic representation of a dismembered digit kept fans guessing at its purpose for days, weeks, even months after the demo's release. And, as Capcom recently admitted to Gamesindustry.biz, it also kept the company from releasing more traditional demos.

"When the demo landed at E3 last year we were delighted with its reception, the huge chatter about the dummy finger, and all the secret nods to previous games filled up message boards and social media," Capcom Europe's COO Stuart Turner said. "While it was always in our plans to expand upon the demo, the feedback took us all by surprise, so in discussions with global offices and R&D it was decided that we should cancel the more traditional demos we'd planned and increase our focus on the current demo."

In other words, Capcom noticed players' obsession with the finger, and wisely thought something akin to "Hey, let's keep this thing going." Several months and updates later, the finger puzzle was given an honest-to-goodness solution. Then the full game came out and we all learned how a demo can't prepare you for the pants-wetting terror that is the Baker family.