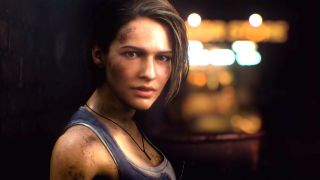 The Resident Evil 3 remake trailer probably has you ready to start surviving Raccoon City as Jill Valentine right now, but it looks like Capcom has something planned to help fill in the gap while you wait. The achievement list for the Resident Evil 2 remake recently got an unexpected addition that points to an update that will further connect the two games, though it's not clear when the update itself will arrive.

The new "Chasing Jill" achievement is awarded when you "read a letter left behind by Jill." The Resident Evil 2 remake has several letters that players can find from other characters, including one from Chris Redfield (or somebody claiming to be Chris) that mentions Jill Valentine. None of the existing letters were written by Jill herself, suggesting that we should be on the lookout for a new addition to the game.

Resident Evil 3's timeline spans both sides of Resident Evil 2. In the original game, Jill arrives at the police station about a day before Leon and Claire, but she's long gone by the time they show up. Still, Jill would probably have enough time to write a quick letter and leave it behind. So we may get to read Jill's letter in Resident Evil 2 then see her writing it in Resident Evil 3. As for what the letter may be about, I think it's probably a fair guess that she'd give her fellow survivors some warning about Nemesis after watching it brutally kill her S.T.A.R.S. teammate Brad Vickers at the entrance to the station.

Think the Resident Evil 3 remake will earn a spot on our list of the best zombie games?