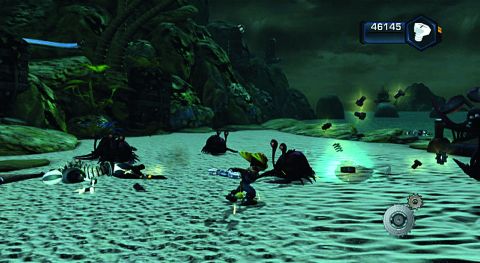 The original Ratchet & Clank: Tools of Destruction was a divisive game here: some loved it; some didn’t see the fuss in what was essentially a hi-def PS2 platformer. So, how does this downloadable follow-up, Quest for Booty, compare, given the game’s glossy visuals have been watered down to fit on the PSN Store? Let’s start at the beginning: this game doesn’t look as good as Tools of Destruction, it doesn’t add anything particularly new and it doesn’t star Clank… only Ratchet makes a return, washed up on the beach of a seaside village, worse for wear and minus his diminutive tin-can sidekick.

Your first goal is to help the townsfolk in and around the island you’ve washed up on, all the while moving one step closer to finding your minuscule mate (nobody bothered to tell Ratchet he was actually off starring in his own solo PSP adventure Secret Agent Clank). The bizarre and usual cast of comical aliens that made past Ratchet adventures such a blast to play through are all present and accounted for in some form or another, but Booty angles itself for a new kind of funny-bone kick with the introduction of zany space pirates like Captain Slag and his first mate Rusty Pete, whom you end up forming an alliance with at one point in the story. Essentially it’s more of the same with the addition of some new mechanics to mix things up a little on the puzzle front and keep the game feeling fresh in the eyes of series returners. Which it does, admirably.

What’s really surprising about Quest for Booty is just how good it looks for a downloadable title. Granted, it’s not as pretty as Tools of Destruction (the PS3 original was a glossy beast) but still, for something primarily primed for the PSN pipe, it’s impressive. So what exactly is the difference between this and Tools of Destruction? For one, it’s smaller with you wading through the game in around three to four hours. But then, that’s why you’re paying a budget price and not the full whack. As with all subsequent Ratchet follow-ups, there is a wedge of new features for you to get to grips with; Quest for Booty’s angle is you’re now able to push and pull objects with an electric tether.

With Ratchet’s newfound ability, you’re able to solve puzzles by moving platforms and objects at will to achieve objectives like rebooting wind turbines on the island of Hoolefar. Ratchet can also now pick up objects with his wrench, which is where the element of light and darkness comes into play. Sometimes you’ll have to cross dark caverns and areas loaded with nasty fanged flying critters who attack in the shadows, using makeshift lanterns from glow-in-the-dark toad creatures to keep the hungry swooping buggers at bay.

Once you arrive on the island you’re stripped of all your tools of destruction. Ratchet does have other weapons at his disposal, but these have to be collected as you progress with the emphasis placed firmly on utilizing your wrench electromagnetism. That’s not to say other elements from previous entries have been sacrificed. Ratchet still winds up dabbling in his fair share of rail grinding, platforming and swinging on his way to his ultimate goal. So the game still feels familiar while adding in a few new tweaks.

Long time Ratchet fans will already have made their minds up. They’re picking this one up, and rightly so – it’s a solid and fun addition to the series canon with kudos to Insomniac for cooking up new and inventive ways to keep the series interesting time after time. Anyone else sifting through the PlayStation Store in search of a Saturday afternoon game-fix is in for a slick platforming play-through. Stripping Ratchet of his glossy visuals (good as it is for a PSN game) leaves the gameplay bare for all to see and though there are some nice ideas, they are generally ones you’ve seen before.

Insomniac has also missed a trick by not including Trophies in the game. We’re crying out for devs to start implementing the system and a platformer of Ratchet’s calibre would have been a perfect fit. If you’re after a solid platformer to play through as your Friday night alcohol buzz slowly wears off, Quest For Booty would be a good choice.