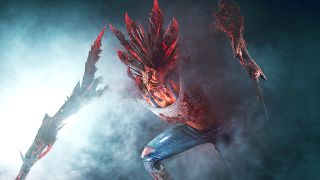 Rainbow Six Siege is, first and foremost, a competitive multiplayer game. Though single-player had traditionally been a fixture of the Rainbow Six series, Siege went all-in on an ever-expanding online ecosystem of PvP - a gamble that paid off, considering that the playerbase continues to grow as Siege enters its Year Three slate of new content. But there's finally a reason to be excited about pure co-op in Rainbow Six Siege with its upcoming 3-player Outbreak mode, a mini-campaign against swarms of alien-infested mutants that evokes fond memories of Left 4 Dead. I've had the chance to fight my way through Outbreak's harrowing hordes and loved every second of it - so it's unfortunate that Ubisoft seems insistent on keeping Outbreak as a limited-time event.

Outbreak and its sci-fi premise boldly step outside the typically grounded bounds of Rainbow Six Siege. An alien parasite finds its way onto Earth via a crashed satellite and subsequently wreaks havoc on the real-world city of Truth or Consequences, New Mexico, morphing its denizens into bloodthirsty creatures covered in crimson shards. Up to three co-op teammates must choose from 10 Operators to fight back the infestation: Finka and Lion, the two new Operators from Operation Chimera, are joined by Smoke, Ying, Buck, Ash, Doc, Kapkan, Tachanka, and Glaz (or the vanilla Recruit, if you'd like to make things harder on yourself by playing the standard gadget-less grunt). Speaking of self-imposed difficulty, you also have the option of tackling Outbreak solo or with only one other player - but your chances of survival will plummet accordingly.

Unlike the rest of Siege, Outbreak has a cohesive narrative holding it all together, told through beautifully animated cinematic cutscenes and in-game chatter from familiar faces like Thermite and Jager. It's an appreciated level of backstory that draws you in without the need to comb through expansive Operator bios for context, and while the scenario is more outlandish than Siege players are used to, the polished presentation can win anyone over. It even has great Batman: Arkham-style death scenes that give you a closer look at the cause of your untimely demise, spotlighting the eye-catching enemy designs against a foreboding black backdrop.

Those enemies come in five freaky varieties. Grunts are the standard targets who will rush you on sight, but can be taken out with a single headshot if they're unaware of your presence. Breachers leap around trying to blow up their disgusting, acidic back-pustules to obliterate Operators and barricades alike. Rooters disable unsuspecting players with spikes they push up through the ground, and can teleport away when they're in danger. Smashers are hulking, blind brutes that bum-rush whoever's shooting them, and can knock you down with a single swipe; the key to downing these Tank-like titans is making them smash into a wall, then plunging a knife into their exposed back-meat while they're dazed. Finally, we have the hovering Apex, who reminds me of Doom 2's pesky Archvile; they're able to summon Grunts, blind you with a blast of black goo, and withstand plenty of firepower thanks to evasive movements and a large health pool.

There are three sizable maps to clear out, each split into two parts with their own objectives: the spacious Resort, the claustrophobic Hospital, and the grand finale infested nest at the Junkyard. Once you've conquered these maps on the default difficulty, you can try to overcome Pandemic mode, where friendly fire is turned on and the infected attack you in droves. With so much content to enjoy in Outbreak, it seems bizarre that it's all been built for what's reportedly a limited-time event. PC players can venture onto the Technical Test Server to try Outbreak out as soon as February 20, while the complete mode will be playable on all platforms from March 6 through April 3. After that, Outbreak is scheduled to go away - maybe temporarily, maybe forever.

After playing and loving Outbreak, I asked Alexandre Remy, brand director on Rainbow Six at Ubisoft Montreal, about the reasoning behind making Outbreak a temporary mode. "Why the limited time? It makes sense to look at an event that was intended as a sort of gift or present to the community as something that is limited in time by definition," says Remy. "Rainbow Six is, by nature, a competitive game more than it is a co-op mode versus zombies. So, putting a limited time on Outbreak was a way to say, 'Hey, thank you community. Thank you, players, for being with us. Let's open Year Three with a cool gift.' But our focus is to make a PvP, competitive game." I ask if player demand could make the development team consider keeping Outbreak as a permanent addition. "Would you give the same present on someone's birthday twice? Maybe not," Remy replies.

That seems like a real shame, because Outbreak is a fantastic chunk of co-op fun that only adds to Rainbow Six Siege's value as a complete package. Nobody buys Siege for the current, play-any-time co-op mode Terrorist Hunt, which has you hunkered down on regular multiplayer maps against waves of easy-to-predict AI goons. Nor is there much longevity to the single-player Situations, which are essentially tutorials with optional challenges to entice completionists. But I could easily see Outbreak being a gateway to the rest of the game for new players, who get to familiarize themselves with the unique Operators while racking up kills without the pressures of competition.

I think the free addition of Outbreak mode will be an instant hit when it launches in the coming weeks, and will delight Rainbow Six Siege players in ways they aren't expecting. But the insistence on keeping it short-lived as a month-long, limited-time release is part of a trend I wish online games would move away from. MOBAs like League of Legends and Heroes of the Storm are guilty of locking some amazing modes and maps behind timed events, and if you don't happen to be playing at the right time, you might miss out on what could've been the most enjoyment you've ever had with the game. It makes me long for the days of Warcraft 3, when additions from the development team where just custom maps you could play at your leisure. To avoid any FOMO melancholy, be sure to give Outbreak mode a try when it hits Rainbow Six Siege for PC, PS4, and Xbox One on March 6.

If you're just starting out with this fantastic FPS, be sure to check out our Rainbow Six Siege Operators guide for beginners!