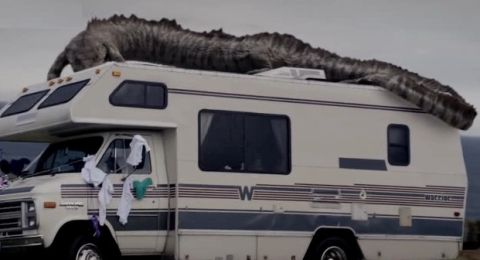 The worm that turned out to be real. CONTAINS DETAILED SPOILERS

THE ONE WHERE A village myth about a giant worm turns out to be true and Matt goes in search of the kidnapped Emily.

VERDICT Primeval series four is finally settling into its groove with the arc plot elements dovetailing nicely here with a monster-of-the week story that forces Philip to reveal his true colours - that he’s far more interested in the potential of the anomalies than the dinosaurs that come through them. Shame that Connor can’t seem to see how obsessed he is.

The main plot was decent enough, and again benefited from a move away from the urban setting. The episode made good use of the “we don’t like stranger ’ere” location and the scene in the pub was hilarious (“Any chance of a white wine spritzer?”). The worm/Koolasuchus was a pretty standard Primeval monster, and occasionally poorly-matched to the backgrounds (the CG lighting in the daylight scenes didn’t seem up to the usual standard but it did look fantastic in the cave scenes). Luckily, it was placed into an intriguing story about local myths and a malfunctioning anomaly that stopped it from becoming just another monster on the rampage tale. But who’d have guessed the anomalies are petrol-powered? Should we read anything into that about fossil fuels?

Meanwhile, the Emily/Ethan storyline made an interesting leap forward. Although it’s slightly irritating that we’re only being drip-fed their back story (surely after the events in this episode somebody at the Arc would be demanding that Emily tell them what the hell is going on) you get the feeling that some major revelations are on the way. Ethan is developing into a fine big bad, and you can’t help thinking he’ll be a major element in the episode seven cliffhanger.

The direction was slightly flat in places (especially during the dodgy fishing scene); it all felt a bit disappointingly “TV” after the cinematic efforts of the past two weeks. And while you can understand that Abby might be in a bit of a strop after the events in the previous episode, it's a shame this seemed to translate into her being annoyingly bland all the way through this episode. She was completely lacking in her usual spark and charisma. Okay, Connor and Philip have pissed her off, but she could have a joke or a warm moment with Matt or Jess.

MONSTER OF THE WEEK Koolasuchus.

IS THAT A GUN IN YOUR POCKET In the scene after they’ve exited the pub, Abby, Connor and Matt are all weaponless. In both of their next scenes, they’re all carrying dino-blasters. None of them seemed to go back to the car, so where were they hiding those things? They’re massive! It’s not like you could stick ’em down the back of your trousers without giving you a funny walk.

INFLUENCES There were a number of films either referenced or directly quoted in this episode, including The Blair Witch Project (that guy’s beanie hat was clearly no coincidence), The Texas Chain Saw Massacre , An American Werewolf In London and Deliverance (though Connor’s attempt to hum “Duelling Bangos” was hilariously pathetic).

ALL HAIL LESTER For those of us who think that Lester has been underused so far this series, this episode was a real treat. Not only was it great fun watching him trying to cope with the ARC’s technology, but his ongoing friction with Philip is becoming one the best things in the show. Plus he also gets a whole slew of great lines: "Why can’t he kidnap her in the Jurassic era where it’s not my problem?” and, “Sarcasm won't get you promoted, Jess,” being among the best, though you have to love Jess’s response to that last one: “Must have worked for you.”

BEST LINES:
Abby: “I don’t know of any farm animal that produces mucus like that.”
Connor: “Maybe it’s a giant snail. At last, a creature that we’re gonna be able to outrun.”