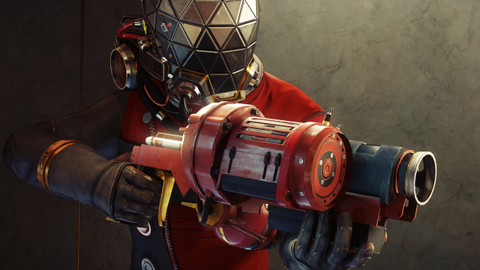 With a setting that tells a story better than any human voice, Prey’s combat and quests will suck you even deeper into its world.

I never thought a building could be arrogant until I arrived in Talos-1. Wood-panelled walls stretch high above me, golden metal struts outlining each edge. A smug voice lulls through the PA system reminding employees to congratulate one of the scientists on winning a prize. Yet bodies are strewn across the marble floor. I’m swinging a wrench in one hand, mistrusting everything I see. Because any moment an ornament or mug could warp into a Mimic, an alien halfway between an oil slick and a spider. Aliens might be out to get me, but I’m afraid they’ve met their match.

The Talos-1 space station is a remarkable monument to mankind’s inventive streak. Owned by the TranStar corporation, it’s a research facility that creates Neuromods. These gadgets genetically modify their users, allowing them to learn skills in a split second - ice skating, playing the violin, coding, etc. Little do the public know that the key ingredient in Neuromods is an ‘exotic’ material gathered from the Typhon (which are definitely-not-deadly aliens. Nope. No, sir). Kept a secret due to their highly unpredictable nature, it’s not long before the inevitable outbreak occurs. Experimenting with the new Typhon Neuromods that give the user alien abilities, as Morgan Yu you start out as TranStar’s most diligent test subject. Until everything goes to hell. Those who prodded you with needles begin to get consumed by the escaped aliens. Try not to enjoy the sight of them dying too much.

With well over 50 hours of gameplay at least, death will be a familiar face by the end of your first hour in Prey. Given a wrench to start with (in a nice nod to BioShock and the original Prey), it’s inevitable that you’ll start thwacking inanimate objects in blind paranoia, thinking they’re Mimics. These alien bastards will disguise themselves as mugs, ornaments, pretty much any harmless everyday object. They’re not particularly strong, though, so they’re a mini-jumpscare each time you find one. However, hit one when it’s disguised and the ‘Ha! Got you!’ catharsis is bliss. The real star weapon in Prey is the GLOO Gun, though, which is versatile enough to use as a way to access the out-of-reach sections of Talos-1 (by building a bridge of GLOO bubbles) and then stop a Typhon in its tracks before you murder it to bits with a shotgun. It all makes you feel every inch the ingenious scientist that many emails paint Morgan out to be. Combat feels natural and incredibly freeing, as you can hulk out and chuck tables and chairs around with abandon. Or more agile types can mix in the effortless use of alien powers, tapping the left trigger to cause a wave of thrilling devastation. Prey’s weapons aren’t about upscaling to a new, shinier type. They’re about finding the perfect tactic for each enemy, but having improvisation waiting in the wings as your deadliest weapon. When you meet new enemies, that’s when your instincts take over and you use Prey’s weapons inventively. Panic and paranoia, oddly, will help you most. Give in to them.

Jazz up your gun

How to get Prey’s Golden Gun

Think of the Mimics as stepping stones to the lurching other types of Typhon. You won’t know what they are at first. Seeing ‘???’ above the head of an enemy instead of a name is a smart, fitting way to introduce new foes - you work in a research facility, so ignorance is by far your greatest weakness. Those question marks never stop being unsettling. Proving how unknowable the Typhon fundamentally are, being attacked by unnamed enemies means that eventually getting your hands on a psychotronic scanner is revolutionary. Suddenly being able to scan creatures to learn their name, weaknesses, as well as research their power, it comes across as exactly the leap in technology that Prey’s backstory paints it to be. With enough research you’re able to steal these alien abilities and use them for yourself. Doing so is an intense high. Each new discovery becomes drenched in intrigue, as underlining every new alien attack that hits you is the smug knowledge that soon it’ll be yours. Despite the admittedly tough difficulty at points even on Normal mode, Prey isn’t scared of making you potentially overpowered with the sheer variety of Typhon skills available. The more you use these powers, the more you understand what makes your enemies tick. Because you’re using them in eerily, worryingly similar ways.

You see why the Typhon have beaten the humans: they’re simply better. Prey seems to think so too, as human perks are left behind in the wake of all this alien advancement. That’s not just a nod to the corpses strewn around the space station. Although the Typhon perk tree grows bigger with the research you do, the human perk tree stays the same size. There’s no way to expand it, even though you can scan the man-made floating robots and turrets making their way around Talos-1. You’d expect that to give you a couple more buyable skills in the engineering section at least. It comes across as a bit of an oversight, giving the impression that Prey is pushing you towards embracing the alien perks.

That doesn’t mean humans are treated as props, with their corpses scattered around to look shocking. Each body is named, and (as long as they haven’t had the life pulled out of them by a Typhon) every single face is different. Initially it looks like these might just be randomly-generated names. Brilliantly, they’re not. Reading emails, post-it notes, hearing audio logs, and seeing the names on bedroom doors makes it clear that these people you’ve been stepping over were integral to the ship. Stumbling upon the body of someone you remember reading about is a startling reminder of Talos-1’s casualties. There’s a pang of regret in there too that they didn’t make it.

It’s not that surprising, though, as the odd unscripted explosion shakes Talos-1 and reminds you that everything is falling apart. Yet the drive to explore pushes you to new areas. Once you’ve cleared out the enemies in these locations Prey becomes practically a walking simulator, allowing you to uncover more of the rich backstory that fleshes out your understanding of Morgan Yu and his/her world. In these moments the environment shines. In-depth sidequests make the rooms and computer terminals strewn with personal effects mean something, and more than make up for the admittedly bare main storyline. Most of them are anchored around the stories of the Talos-1 staff: lovers meeting under a special tree, finding a treasure hunt for tabletop roleplayers, or simply hunting down a stowaway. Coming across as heartfelt rather than sanitised fetch quests, they echo what it must have been like before the Typhon outbreak. Poignancy bleeds into each one as a result: Prey cares a great deal about its human factor. So will you.

Where the hell is he?

Where to find Josh Dalton in Prey (The Blackbox Project sidequest)

Yet you’re still breathing because you’re every inch the survivor Morgan Yu is. The recyclers and fabricators dotted around the station don’t feel contrived at all. Recyclers turn your junk into crafting resources, which fabricators use to create ammo, medkits, or even guns. Their placement makes total sense: recyclers in the staff breakroom for their rubbish, fabricators in the kitchen to create food. It means that it’s easy to predict where you’ll find one, telling you that you’re taking advantage of Talos-1, turning what were basic amenities into crucial survival tools. Plus the actual process of recycling and fabricating is unbelievably satisfying. The noise the blocks make as they tumble out of the recycler, the fact that each one has to be picked up individually and slotted into the fabricator with a weighty click: it feels so damn good. You’ll become conscious that you’re managing your resources with the cold, clinical eye of someone who has no space to spare, and no time to waste.

Talos-1 isn’t just a location. The space station is a story in itself, with every inch of it marked by the people who used to live and work there. Walking through its corridors and gradually ridding them of the Typhon brings it closer to what it used to be. Weirdly, you wouldn’t belong if everything went back to normal. Because over the course of the game it becomes increasingly impossible to stop thinking with your GLOO Gun and Typhon powers. Prey is a playground for creativity where you control the variables. It’s time to start experimenting.

With a setting that tells a story better than any human voice, Prey’s combat and quests will suck you even deeper into its world.