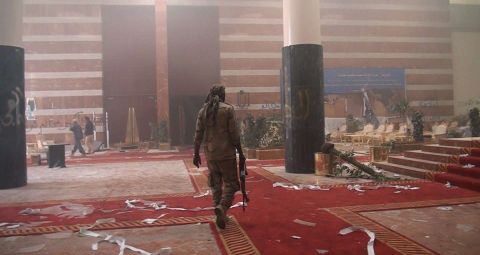 In his mid-20s, still living at home in Baltimore and cosseted by his mum and grandmum, Matthew VanDyke decided he needed “a crash course in manhood”. So he bought himself a motorbike, bid farewell to his patient girlfriend Lauren and, inspired by Lawrence Of Arabia, took off for North Africa and the Middle East. With a camera.

Right from the start, VanDyke, with his “urge to do wheelies in every shot” has himself pegged as the star of his own movie, with everywhere he visits as the backdrop. In Gibraltar, getting his first glimpse of Africa, he enthuses that the continent is “just like I would have written it into a script”. At one point he reinvents himself as international adventurer Max Hunter, “a swaggering, egotistical, ridiculously reckless guy”.

What makes Marshall Curry’s doc so fascinating is that, as these quotes suggest, VanDyke is aware of his own pretensions. And this schizoid vision ratchets up when he finds himself somewhere that might have given T.E. Lawrence pause. In 2011, soon after he gets home, the uprising erupts in Libya. Having made friends there, he feels compelled to head back and help the rebels – only to get captured and slung in jail.

Liberated, he joins his friends as a full-on combatant, complete with bandana and AK47. But even now he’s asking himself “Is this authentic?” When his jeep comes under fire he dashes for shelter, only to find he’s gripping his camera, but has left his gun behind – a telling moment.

Curry, as you’d expect, makes extensive use of VanDyke’s own footage, splicing it with a long post-Libya interview. He leaves us with VanDyke’s most tormented question, which we won’t reveal. But suffice to say it’s as topical as it is haunting.