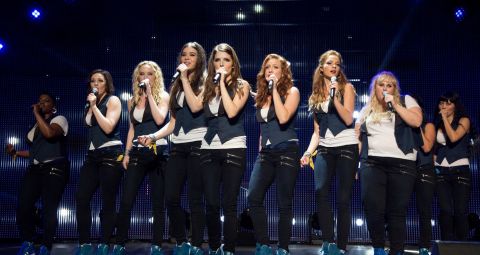 If you loved Pitch Perfect you’ll find plenty to enjoy here because it’s pretty much exactly the same film, but there’s enough wit and warmth that it feels like a worthwhile sequel.

The Bellas are back for an encore...

Right from the opening number – which unceremoniously ends in a cringey, gross-out on-stage fail – it’s clear Pitch Perfect 2 is singing from exactly the same song sheet as the original. Sticking to the formula like a well-rehearsed dance routine, the sequel inevitably lacks the freshness of the original but, thankfully, it’s funny enough to warrant sitting through again.

It picks up a couple of years after the first film; a cappella group the Barden Bellas are at the top of their game and, now three-time national champions, they’re performing for the President before the aforementioned foul-up finds them back before square one.

Shamed off the circuit, their only shot at redemption is to win the world championships, facing off against ruthlessly efficient German rivals Das Sound Machine. Meanwhile, Beca (Anna Kendrick) is drifting from the group as a record-label internship takes off.

The Bellas might be underdogs once more but the film still comes loaded with expectation. The 2013 original was an unexpected delight; what sounded like a cloying Glee cash-in ended up a genuinely funny musical comedy, with toe-tapping numbers and bawdy one-liners. But if that film felt a little predictable, it’s nothing compared to the follow-up, which reproduces the beats of its predecessor while barely remixing them.

Luckily, the film is funny enough to never feel stale. Once again, Rebel Wilson’s Fat Amy is a dependable highlight and she’s rewarded with her own subplot. First-time director Elizabeth Banks (who produced the original as well as nabbing a supporting role) handles the laughter and singing with equal confidence: while a sequel was never going to be the ideal place to establish a unique directorial voice, there’s little sign of inexperience here.

Banks is also smart enough to keep her a cappella commentator Gail and boorish co-host John (played once again with relish by John Michael Higgins) on the sidelines, only occasionally being deploying to deliver wilfully offensive, scene-stealing snipes, but other supporting characters could’ve been better served.

Hailee Steinfeld’s new recruit, Emily, is thoroughly likeable but her arc never quite feels weighty enough to register. And while one-liners are spread fairly evenly, some of the backing Bellas are invisible to the point of becoming an in-joke. But it’s impossible to complain too much about a film that will leave you humming, quoting or both.

If you loved Pitch Perfect you’ll find plenty to enjoy here because it’s pretty much exactly the same film, but there’s enough wit and warmth that it feels like a worthwhile sequel.