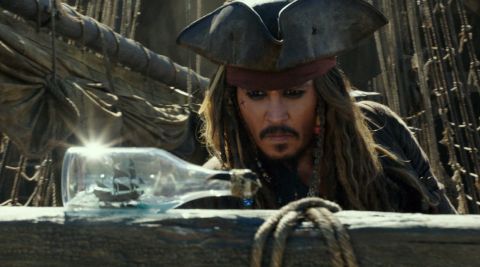 A rollicking romp, with everybody on top form, this is a summer blockbuster par excellence.

Six years since we last rode the high seas with Cap’n Jack Sparrow in On Stranger Tides, Johnny Depp returns to his signature role. With his ship the Black Pearl now shrunken inside a tiny bottle, he’s even more hapless than usual, in charge of a bare-bones vessel named the Dying Gull. This is not a bad omen, as Salazar’s Revenge is a hugely enjoyable ride.

With the (Disney-friendly) theme of parenthood woven throughout Jeff Nathanson’s (Catch Me If You Can) script, Revenge introduces new directors, new heroes and one of the best Pirates villains the franchise has seen in the shape of Javier Bardem’s titular seaman.

Stuck in the Devil’s Triangle, this ghostly captain – brilliantly augmented with CGI – seeks vengeance on Sparrow for reasons that become clear later on. “He took everything from me and filled me with rage and pain,” he spits, lashings of black goo coming from his mouth.

Also entwined in the story is Henry (Brenton Thwaites), son to Will Turner and Elizabeth Swann, who is desperate to unlock his father (Orlando Bloom) from his below-sea curse. When Henry encounters Salazar, it leads him to Sparrow, as well as Kaya Scodelario’s orphan astronomer Carina, “a woman of science” who is probably the only one smart enough to find the Trident of Poseidon, the ocean-controlling, curse-lifting MacGuffin everyone’s after. And in case you were missing him, Geoffrey Rush’s now-wealthy rival pirate Barbossa gets roped in, too.

Norwegian directing duo Joachim Rønning and Espen Sandberg (2012’s seafaring epic Kon-Tiki) nail their first major blockbuster with some aplomb. The pacing is spot-on, the set-pieces memorable and all the characters are allowed to shine, without it ever becoming The Johnny Depp Show.

Standout moments include the opening bank robbery (with horses towing an entire building away), an execution scene complete with swinging guillotine and Salazar unleashing some ghostly sharks (super-scary in 3D).

Led by Depp, the humour is salty (jokes about a one-legged man with 18lb balls and Carina being a horologist) but not to excess. Thwaites and Scodelario are quite watchable, with their 12A romance bubbling under, and Bardem, if not let fully off the leash, à la Skyfall, still has a ball as the baddie.

With a couple of neat cameos too, including a certain musician who rivals Keith Richards’ turn in the earlier Pirates movies, it’s certainly the most enjoyable entry since 2003 series-starter The Curse of The Black Pearl. Factor in a surprisingly satisfying finale – emotional, romantic, swashbuckling – it’s everything you could want from a Pirates movie.

Pirates of the Caribbean: Salazar's Revenge

A rollicking romp, with everybody on top form, this is a summer blockbuster par excellence.