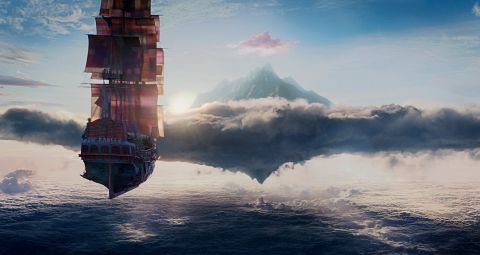 Stripping J.M. Barrie’s story of its most magical elements without replacing them with anything substantial, it’s hard to imagine anyone really caring about Pan.

Does Peter Pan just not work in live-action film? And will origin stories always strip fairytales of their magic?

If the answer to either of these questions is no, there’s little supporting evidence for the case in Pan. A solid but uninspiring look at the time before young orphan Peter becomes the feather-capped flying swashbuckler, the film’s decision to strip J.M. Barrie’s evergreen tale of its iconic elements is never vindicated by the alternatives offered.

Joe Wright’s prequel begins with a baby left at the door of a London boys’ home in a noirish sequence; 12 years later, during WW2, mischievous Peter (Levi Miller) and some of his fellow orphans are kidnapped by bungeeing pirates and whisked away to Neverland where they’ll be interned in a work camp. Captain Blackbeard (Hugh Jackman) keeps a close eye on Peter, as he might just be the prophesised whippersnapper who'll pose a threat to the pirate rule.

Soon teaming with James Hook (Garrett Hedlund) – a two-handed goodie in the prequel’s timezone - Peter plots an escape from the camp to find a magical mcguffin and, hopefully, some closure with his absent mother.

Miller handles the lead role with confidence, but there’s little depth to his relationship with Hook, and no hint of the tension to come. Hedlund’s eyes-wide, teeth-bared style also gets irritating quickly. Jackman is much more fun, having a ball as the scenery-chewing villain who seemingly takes style cues from Versailles, but he’s too quickly sidelined.

Wright’s visual sense is as keen as ever – the Neverland sets make an ideal kids’ playground, and Jacqueline Durran’s eye-popping costumes warrant close inspection. The biggest problem is that it’s just not that much fun. Peter and Hook plod through the various zones on the treasure map, but the new mythology feels flimsy, and there’s never any palpable tension or drama. Even during the aerial chase sequences, pulses rarely quicken. Sub-par CGI doesn’t help, miniaturising the flying ships and making a floating synthespian Peter look like a missing Tintin extra.

A late-doors attempt to sprinkle some fairy dust (literally) on the climactic battle is an eyesore, while the emotional payoff is borderline laughable. As Peter Pan should be one of the ultimate wish-fulfilment heroes for kids, it’s baffling to see how he’s been appropriated for such an awfully middling adventure.

Stripping J.M. Barrie’s story of its most magical elements without replacing them with anything substantial, it’s hard to imagine anyone really caring about Pan.