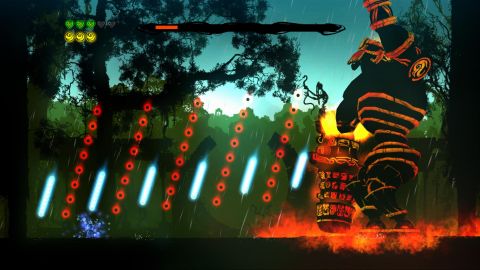 There are enough borrowed core mechanics from other popular games found woven all throughout the fabric of Outland that you could make a drinking game out of calling them out. Developer Housemarque did its due diligence in strip-mining classics like Super Metroid, Ikaruga, and Prince of Persia - to name just a few - for ideas to inject into Outland. This 2D action platformer may be a pastiche of well-worn ideas found in games that came long before it, yet its many disparate elements blend together to create an experience that still manages to feel fresh and original.

Let's forget for a moment that the game's nimble neon hero looks like he was yanked straight out of the movie Tron or that the story revolves around some mystical mumbo jumbo concerning a troubled world struggling to find balance between order and chaos. Outland delivers a hearty dose of pure platforming bliss wrapped in one of the most spectacular creative presentations we've seen. From the deep layers of scrolling scenery in the background to the soft glowing colors that silhouette against the dark foreground, the game's distinct art style is simply beautiful.

The mix of platforming and brawling action is tight too, featuring responsive controls that make the frenetic encounters with foes, traps, and flying bullets a lot of fun to navigate. You start out weak, with only a meager number of powers as you run, jump, and climb your way through a dark realm filled with lush backdrops and bursts of neon luminescence. Once you nab a sword, you can dice up the unfriendly beasts and humanoid foes you encounter and smash obstacles to collect coins for upgrading your hero. Many other basic abilities are uncovered while exploring, and most of these coveted enhancements, like the floor smash and the ground slide, serve as a means to open up new areas to venture through.

There's one ability in particular obtained early on that becomes one of the most defining features of Outland's increasingly hectic gameplay. Gaining the power to shift your character's elemental polarity between light and dark unlocks a whole new level of complexity. A quick button tap can rapidly swap your hero's neon aura from red to blue on the fly. You can only slay certain hued enemies when you're donning the opposite color, and it also lets you absorb energy blasts that match your current color without taking damage from them. This simple twist is key because Outland has an unexpected and very cool bullet-hell element that grows crazier as you progress. Since it's impossible to dodge all of the hypnotic bullet patterns that blossom outward with increasing intensity, you have to shift colors in order to absorb some of the energy blasts in order to stay alive while you leap and bound through levels.

Though the difficulty spikes steadily once you get through the early portion of the game, frequent checkpoints save you from having to replay lengthy stretches of challenging turf. There are areas that feel like punishing gauntlets of bullet doom, but they're not as painful to endure when you can bounce right back after getting mauled. Beyond the substantial and enjoyable main campaign, Outland also has an arcade mode worth exploring if you feel like revisiting some familiar territory from the main game on a strict time limit. There's also an online co-op mode that lets you tackle the main game with a pal or try your hand at several unique challenges that require careful teamwork.

When you get right down to it, Outland cannibalizes a lot of tried-and-true gaming elements and turns them into something entirely new and exciting. The magical realm you explore is visually captivating, overflowing with elegance and mystery. More importantly, it serves up some damn good gaming.