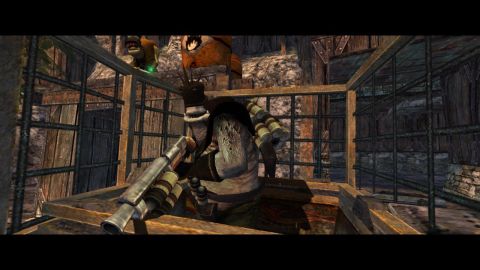 A large chicken hawk is taunting us while his massive shotgun is dealing brutal damage with every hit. As we cower behind a wall, there’s a decision to be made. Should we lay traps with furry, fuzzy spheres that happen to have teeth like piranha, then follow those up with lethal blasts of hard-shelled slugs? Or does the best course of action dictate we should fire an electricity-charged bug at our foe and then hurl a spider that will wrap him up so we can deliver our prey alive? After all, we desperately need money, so every dollar counts. On the other hand, being dead won’t help us out at all. Keeping ourselves alive is paramount, even if it means we don’t get paid quite as much.

If none of this sounds familiar – or even sane – then you’ve never played Oddworld: Stranger’s Wrath. Unfortunately, that’s a healthy percentage of people, since the title didn’t sell much when it came out as an Xbox exclusive at the tail end of that system’s lifespan. Whether Wrath was ahead of its time or simply a victim of it has been debated for years. Luckily, thanks to a snazzy high-def upgrade that’s been released on the PlayStation Network, none of that matters much.

The Oddworld franchise has always lived up to its name and Stranger’s Wrath fits right in. For reasons that aren’t always explained, just about everything is, well, weird. Much of the world’s population is made up of chicken people; the protagonist is some sort of furry, angry, neon-eyed creature that needs an expensive operation. This fellow, named the Stranger, is a bounty hunter whose weapon is a crossbow that uses living creatures for its ammunition. These animals must be captured in the wild and each has a unique feature that clearly separates it from the others. Therein lies much of the game’s beauty.

Stranger’s crossbow can fire two types of ammo at a given time, and they can be swapped out in an instant. As he goes about his bounty hunting business, the delicious challenge is determining which combination of ammo will work best to take down the enemy at hand. There’s rarely a single answer, and often it depends on whether you want to take your prey alive or dead. Ultimately, the Stranger needs money, and the faster you can get it, the faster he can take care of the mysterious medical procedure he needs. Living bounties are always more valuable than dead ones.

Each weapon is spectacularly different. Chipmunks will attract enemies to the spot they land, allowing you to fire spiders that will wrap victims in a cocoon, or if you want to go for a kill, you can fire slugs instead. Electricity-charged bugs will incapacitate most enemies for a few moments, which make them perfect targets for exploding bats. Fiercely vicious bees can be fired like machine gun bullets, which are particularly deadly when your enemies are already being attacked by fuzzy, biting miniature squirrel-like things. Much of the fun that Wrath has to offer is experimenting with the adorably deadly living ammunition.

And there will be plenty of experimentation, because Stranger’s Wrath is pretty tough. Even though much of its core design shows its age – from its linear path to repetitive dialogue – each of the major set-piece battles is a challenge. The significant amount of damage that a single hit from an enemy inflicts is in stark contrast to most modern titles in the genre, and if you’re not careful you’ll die. A lot. Luckily, Stranger can heal himself quickly by, um, smashing himself in the chest, and that comes in very handy.

Visually speaking, the high-definition polish is terrific. The characters, environments, and especially the living ammunition look great. The audio leaves something to be desired, only because we’re much more used to current-generation dialogue; it’s a definite throwback to hear your enemies say the same “Hey, look over there!” and “Aw, I lost him” lines over and over.

Ultimately, Oddworld: Stranger’s Wrath HD is an easy recommendation whether or not you’ve played it before – but especially if you haven’t. Between its unique weapons, out-there world, and shocking late-game plot twist, there’s a lot to really like even as it occasionally reminds you it’s a 7-year-old game. They don’t make ‘em like this much anymore.