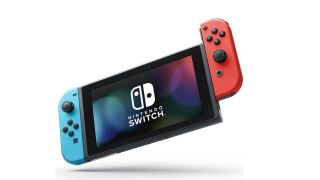 Upcoming models of Nintendo Switch will reportedly run on new display technology, which could mean both better quality visuals and even more improvements to battery life. The news comes from the executive vice president of Japanese electronics company Sharp, who told The Wall Street Journal that his company will supply its new IGZO displays to Nintendo.

The Sharp executive didn't specify which Nintendo products will use the displays. Nintendo may have a different game system in the works that will use Sharp's IGZO technology, but with both Switch Lite and the battery-boosted Switch model on the horizon, it doesn't sound like Nintendo's leaving the Switch family behind any time soon. It's probably safe to assume they're headed to Switch for now.

IGZO stands for indium gallium zinc oxide, a new technology that Sharp began mass producing in 2012. Sharp says IGZO's highly stable and conductive properties allow it to significantly reduce power consumption and physical bulk while displaying brighter, clearer images. It also reduces electronic noise that can interfere with touchscreen sensitivity, which could be useful for Switch (especially budding Super Mario Maker 2 level creators, who could use all the precision they can get).

Sharp has been pegged as a supplier for Nintendo Switch components since March, so it's possible that the partnership covers the Nintendo Switch Lite models that are likely entering distribution right now. The improved battery life and reduced size offered by IGZO displays line up with Switch Lite's positioning as a more portable-friendly counterpart to the standard model. It would also fit as one of the revisions for the new standard Switch that sports improved battery life. We'll find out for ourselves soon, as both consoles are scheduled to start hitting shelves throughout August and September.

Find something new to play on our list of the best Switch games.