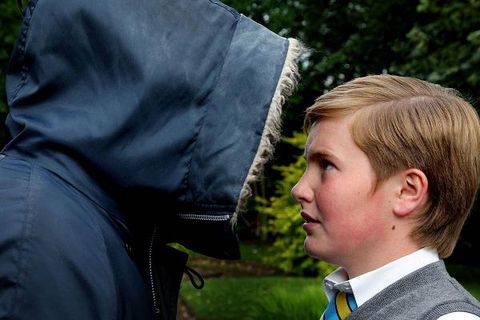 Nine years after he picked up a Golden Lion at Venice for The Magdalene Sisters, it’s fair to say Peter Mullan probably has Shane Meadows to thank for NEDS making it to the big screen.

However, while its working-class street gangs in retro fashions echo This Is England, Mullan’s film is a much more forbidding beast, ditching Meadows’ inviting nostalgia (pre-Stephen Graham’s arrival, anyway) for a palpable fury against the cruel roots of street thuggery.

Itching to excel at his new school, he’s dismayed to discover it’s not intent on leaving no child behind. At home John has to contend with his downtrodden mother, tearaway brother and drunken, abusive father (Mullan himself, in a blistering cameo that’s at once terrifying and pathetic).

Stifling stuff for a clever lad, then, and since this is British social realism and not Dangerous Minds, Mullan goes on to forensically detail how frustration at his lot drives John (played as middle teen, superbly, by Conor Mccarron) to descend into rage and violence – into becoming one of the title’s non-educated delinquents.

So far, so Fish Tank, or Ratcatcher, or The Complete Works Of Ken Loach. But Mullan’s secret weapon is his largely nonprofessional cast drawn from the Glasgow estates he shot on – watchable and unforced to a man (although Mullan takes no prisoners when it comes to accents), their charm gives heart to what could have been a clunky polemic.

While a late stray into Freudian territory is a misstep, and John’s relationships with his brother and father aren’t as deeply explored as they could be, there’s no denying the grim power of Mullan’s painful study of just how much goes to waste when a whole class has no hope.

Above all, though, there’s an abiding poignancy, and a sadness that things just don’t have to be this way.