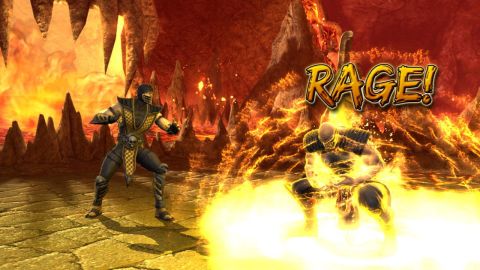 When you consider Scorpion’s penchant for peeling the skin off his victims’ faces and Superman’s long history of do-gooding, Mortal Kombat vs DC Universe isn’t such an obvious pairing – less a deadly alliance than it is a marriage of unlikely convenience – but the contrived set-up does create some undeniably daft, grin-making matchups. Jax vs Superman, anyone? Hokum plot aside, at its heart, the first next-gen Mortal Kombat is as good as it ever was over 15 years ago, for better and worse.

The complex attack-style juggling of previous MK’s is replaced with a more accessible set of moves. There’s a new Rage mode, where if you inflict (or receive) repeated blows, your character glows, allowing higher speed andmore powerful combos – but its effect is undone if your rival counters out, which the computer invariably does. Complex combos require such precision timing and dish so relatively little damage they’re hardly worth bothering with. All characters are lovingly reproduced, though, withamusing special moves like the Joker’s ‘Bang!’ gun or The Flash’s speedy dashes, where he inflicts multiple-blows from blurry copies of himself.

There’s an attempt to explain all of this via the preposterous story mode, in which a strange force pits good MK characters against evil ones, then unites them both against the DC characters who have mysteriously warped into their world, and ultimately persuades everyone that their best interests would be served by combining their efforts against a common foe. Our tip? Switch off your brain and pile in.

It’s so poorly scripted and acted it’s pretty damned funny – Sonya Blade’s fight withCatwoman, who suddenly materializes in her military base, was an early highlight of badness, and it just gets stranger thereafter. The only predictable thing is that whenever two characters meet, one of them is going to beat the truth into the other, and if they’re not friends by the end of it all they’ll be hooking up again in the near future for another one-on-one barney.