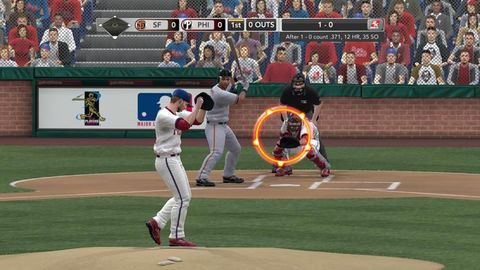 Dedicated PC hardballers have been modding and updating MVP Baseball 2005 the past five years for a reason: it’s the videogame baseball equivalent of the 1927 New York Yankees. Nearly perfect in all key aspects of our national pastime, it boasts slick signature animations, impeccable AI and even a full minor-league system. It’s still the king. By comparison, this year’s pro-licensed game, Major League Baseball 2K10, is more akin to the good-enough-to-win 2006 St. Louis Cardinals.

2K10 successfully patches up the glaring holes in its swing, though its single major innovation is the engaging My Player mode that lets you quickly breeze through minor league games using your own avatar as he tries to make it to The Show. Small improvements to fielding add up to rein in last year’s circus, which felt like trying to steer a headless chicken as you circled under fly balls. Players also no longer dive over grounders or commit unforgivable, idiotic sins, like throwing to the wrong base.

Instead, you feel in control, right down to the welcome ability to pre-load throws before the ball lands in your glove, a feature that smoothes out double-play turns and tag-up throws. It’s a long-overdue feature (lifted from MVP 2005), but we’ll take it.

Batting is also the best it’s ever been in this series. A tweaked camera gives you a better look at how the ball breaks, an upgraded pitching AI will actually try to make you chase balls out of the strike zone, and a defensive swing mechanic that lets you stay alive by flicking left or right on the right stick to try to foul a pitch off. Believe it or not, you’ll actually have to play smart this year, working yourself into advantageous hitters’ counts before it will throw you something good to whack.

Pitching underwent the least amount of surgery this season, as its gesture-based controls didn’t really need it. Twirl your gamepad’s thumbstick in indicated directions to execute different pitch types—pitching gets a bit tougher as your hurler fatigues, but never feels too easy or too gimmicky.

Regrettably, a bizarre lack of check swings completely contradicts the analog stick-driven batting mechanic, and an obvious case of “File->Save As” from the Xbox version means that PC performance leaves something to be desired, even as a few horrific textures bring the visuals down. Still, this series is finally moving up in the standings.