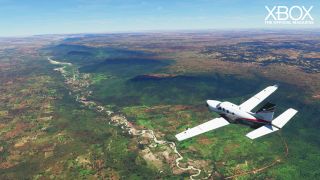 We might not be able to see our houses from here, but we can damn sure spot the place in downtown Seattle where we had to convince a friend not to buy a three-foot long, $45 Alaskan crab leg. Said spot is Pike Place Fish Market, and we have just clocked it while cruising above Rain City in a CubCrafters light aircraft.

Microsoft Flight Simulator is already astonishing. Even though it's not scheduled to hit Game Pass until some point next year, it already offers amazing experiences. Asobo Studio recently helped us keep turbulence at bay during a guided hands-on session, and it takes only seconds to fall head over heels for the engine powering this absorbing sim.

The underlying tech that is bringing Flight Simulator to sky-high life is really something else. Using real-time topographical detail sourced from Bing Maps, it's able to recreate the entire flippin' planet. No, really. Whether you're jetting across Bali or Bognor Regis, you'll witness geography that's entirely faithful to the real- world equivalent on this spinning, waterlogged rock of ours. The first thing we plan to do in the final game? Fly a jet straight to Edinburgh's Arthur's Seat just so we can clock the precise spot where Official Xbox Magazine's games editor fell over at the base of the dormant volcano. All the cider may have been involved. Ahem.

Flight Simulator provides a peek into an incredibly exciting future for video games. This isn't a simple case of serving up more polygons, higher resolutions or better textures. No, this is a game that uses current technology to deliver an experience that would have been entirely unthinkable on Xbox 360. Thanks to Microsoft's Azure cloud streaming service, Asobo Studio is able to pull in two petabytes of data to accurately replicate current weather patterns and real-time flight data. We're pretty awful at maths so we are not exactly sure what a petabyte is, but it sounds BIG.

It may be rendering literally the entire planet, but that doesn't mean Flight Simulator doesn't deliver when it comes to micro details. Though we have only had a chance to fly between Redmond and Seattle, the latter city is recreated in scarcely believable detail. As we chart the sort of dangerously low course that would have the FAA sweating Airbus buckets, we instantly spot landmarks we've visited in real life. Whether picking out the bleachers at CenturyLink Field stadium or trying not to scrape the underside of our plane on the Space Needle's extra- sharp spire, Flight Simulator offers unrivalled virtual tourism.

The actual art of flying is incredibly assured. Although we'll add a quick proviso: we play the game with a special setup that includes pedals, a control stick, sturdy yoke control wheel, and ludicrously detailed dash complete with altitude and airspeed indicators. Thankfully, Flight Simulator works perfectly well with an Xbox One pad; the studio assures us the controls are flexible enough that only a little fidelity is lost in the transition over to pad play.

With the option to either charter flights in real time or play reduced-speed versions of globe-hopping journeys, Flight Simulator isn't just catering to hardcore aviation nerds. Whether you want to treat this as the ultimate tourist trip or a life-eating piloting crash course, the sky really is the limit for this amazing and ambitious simulator.