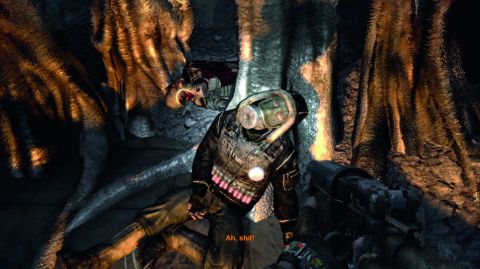 To ensure you never find a comfort zone there%26rsquo;s an arresting paranormal edge to the post-apocalyptic pilgrimage across the devastated Moscow Metro. When the lights are off and the surround sound is cranked up you%26rsquo;re subjected to as immersive an environment as anything currently on the console. The only way Metro 2033 could be more atmospheric is if each box contained a plane ticket to Russia for a guided tour of the city%26rsquo;s abandoned subway tunnels.

We%26rsquo;re not just talking about the obvious pointers either. The stunning visuals, creepy enemy design and sound effects all play their parts as you%26rsquo;d expect. But it%26rsquo;s the little details which really grip you. It%26rsquo;s the people who proudly belt out Russian songs with voices ravaged by twenty years of impure air and vodka diets, or the moment you overhear a young boy telling his friend how the nosalis monsters steal away children and scoop out their brains for food. It%26rsquo;s the time you carry somebody to safety and feel the controls turn sluggish because of the added weight. The way your lighter%26rsquo;s flame will react with acute precision to wind or movement. Everywhere you turn there%26rsquo;s something of note. Stories about the last stand of desperate survivors are told through a series of visual clues: spent casings and blood trails paint a picture so vivid you didn%26rsquo;t need to watch the events to understand what passed.

Above: Before "the event", this poor guy worked in the tax office... this is an improvement

We probably missed plenty of goodies too, though not for want of searching. Metro 2033 sometimes fails to lead your eye to sequenced events (the first time we found a %26lsquo;ghost%26rsquo; we couldn%26rsquo;t see it because our flashlight was off) dueto a little design naivety. An especially sloppy decision proclaims one on-rails level is named %26lsquo;Chase%26rsquo; %26ndash; well before the surprise attack and pursuit in question actually gets underway.

The chief issue, though, is one we%26rsquo;ve already mentioned: the shooting %26ndash; and it%26rsquo;s this black mark which stops Metro 2033 from challenging the absolute best FPS titles on the 360. But it%26rsquo;s a problem you soon learn to forgive, and by the time you%26rsquo;re a few levels in, the iffy fighting hardly harms the other features at all. Besides, it%26rsquo;s something 4A Games can work on during the sequel%26rsquo;s development. The Metro 2034 book is already out, and THQ simply have to order another game as soon as they possibly can. Because while the wait for S.T.A.L.K.E.R. and Half-Life 3 on 360 continues, Metro 2033 is the only real alternative. And, if PC shooters are your thing, what an alternative it will turn out to be.