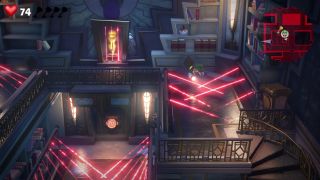 Luigi's Mansion 3 is getting two paid DLC packs, with the first going live on April 30, 2020. That expansion will run you $10/£8 and includes three new mini-games for the multiplayer ScreamPark mode and three new floor themes for the co-op ScareScraper mode.

The ghost hunt continues into 2020! Get access to 6 new ScareScraper costumes with matching floors and ghosts, and 6 new ScreamPark minigames with the #LuigisMansion3 Multiplayer Pack DLC. Pre-order now to get a special Polterpup flashlight: https://t.co/zz8gk6dHFp pic.twitter.com/x2x9qAueR0December 18, 2019

Nintendo's unofficial game of the year is getting another DLC pack on July 31, 2020, but we don't know exactly what'll be included just yet. Along with the new mini-games and floor themes, 'part 1' of Luigi's Mansion 3's DLC journey includes six new ghosts and three new outfits for Luigi. One can only hope Gooigi will find some new duds in part 2.

Pre-ordering the DLC gives you access to an in-game flashlight that projects an image of the indomitable Polterpup onto walls. With the Flashlight Type-P at his side, Luigi can stalk the halls of The Last Resort hotel with the courage of a lion. But first you'll need to unlock the gallery in Professor E. Gadd's lab to access the flashlight.

If you missed out on Luigi's Mansion 3 amidst the holidays and game of the year/decade talk, I'll forgive you just this once. The downtrodden underdog's latest romp (actually more of a nervous shuffle) is magnificent, but don't take it from me - here's what Heather Wald had to say in her Luigi's Mansion 3 review:

"Solving all of the wonderfully clever puzzles will leave you feeling satisfied, and with so much personality and charm, Luigi's Mansion 3 truly proves the green plumber can be the star of the show. After all, Mario can't have the limelight all the time."

As we wind down 2019 and the preceding decade, let's look back at the 100 best games of the decade.