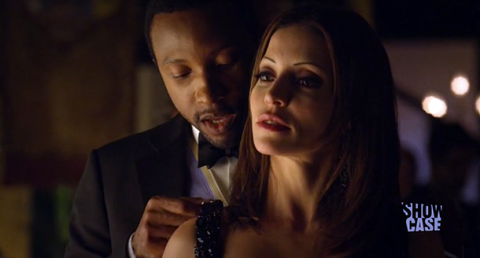 THE ONE WHERE It's Hale's inauguration as the Ash and things don't go well – although it rather serves him right for inviting the Morrigan in a gesture of peace. Dyson is soon kidnapped, Lauren is double-crossed and open war is declared on all claimed humans... including Kenzi.

VERDICT The penultimate episode of this season is brilliantly paced and packed with juicy character moments and drama – a combination that Lost Girl always does so well. From the sweetness of Dyson and Hale sharing a bromantic moment together before Hale's big day, through to Trick being kidnapped and thrown in the boot of a car, and then the reveal that Dr Felt is evil (and probably a little crazy), there's barely a dull moment. Plus there's the killer cliffhanger: Dyson and Lauren are locked up in a dungeon and realise that Bo's estranged mother, Aoife, is locked in the cell in front of them. Cor blimey, guv'nor! What's she doing there?

It's weird seeing Lauren working in the “real” world at the start of the episode, toasting her new scientific breakthrough with champagne, but naturally it all goes wrong and she realises that her amazing heart disease cure is too good to be true. Unfortunately, by then she's also been blamed for Dyson's kidnapping, has brought down the Ash and is responsible for all humans claimed by Fae being declared “terrorists”. Okay, so we know it wasn't her fault, but the Fae don't know that. Lauren won't be on anybody's Christmas card list come December, will she?

LOVE TRIANGLE LATEST Bo is finally starting to accept that she and Lauren are over, although it'll be interesting to see what happens when they're reunited. Dyson doesn't seem to be putting any moves on her, either, so for once Bo's on her own.

BATHROOM BREAK A drunk Tamsin gatecrashes Bo's bath time soak and climbs into the tub with her, gun and all, to regale her with a peculiar monologue which is both lovely (it's very pretty), erotic (because for a moment they look as though they're going to kiss) and disturbing (because Tamsin is clearly wracked with guilt that she's having to betray Bo). A few weeks ago I pointed out that Anna Silk can do drunk really well, which is a tough job for any actor; here, Rachel Skarsten proves that she can, too. The best bit is when she keeps idly flushing the toilet; just the kind of thing you'd do if you're a bit squiffy and don't know what to do with your hands. (“I'll pull this chain. And now I'll pull it again. Whee!”)

HALE BUT NOT HEARTY After a few episodes in which Hale had seemed cold and out of character as he took on the Ash's duties, we finally get to see what's been going on with him here: and it proves that it sucks to be the Ash. Trying to unite Dark and Light Fae, battling old prejudices, having to push friends away and then being backstabbed so vehemently he resembles a porcupine... yep, who'd want this job?

KISS COUNT For once it's Kenzi doing all the kissing, not Bo, as she sucks face with the mysterious guy who is revealed at the end to be the Druid, and also gets to snog Hale. He blurts out that she's more than a friend to him (Kenzi/Hale shippers must be wearing party hats by now), before chaining her up and turning her over to the Fae to be executed. We're sure he's bluffing – and we're also unsure as to why the Morrigan seems to fall for it – but it's chilling nevertheless.

DID YOU SPOT? When Hale is taunting the Morrigan after her failed assassination attempt, he actually has the balls to cheekily slap her on the bum . Of course, being the Morrigan, she probably enjoyed it.

PLACE YOUR BETS NOW... We're not sure what Hale slipped into Kenzi's pocket before he imprisoned her. Either it's some kind of lockpick or, more probably, the gift Dyson gave him at the start of the episode, which should keep her protected in the same way it kept Hale protected from assassination. Fingers crossed...

NAKED AGAIN Dyson loses his shirt once more, this time so that he can fight a (similarly shirtless) Fae in a battle to the death under the watchful eye of Dr Felt. Two half-naked men wrestling and growling makes for pretty cool television, but no shirts means no protective padding. You have to hope they didn't hurt themselves as they were grappling.

BEST LINES
Bo: “I'm not perfect.”
Tamsin: “Yes you are. To me you are. Your eyes are both brown and blue. Your heart is both strong and gentle. You’re virtuous. And you’re a succubus. You shouldn’t be real.”