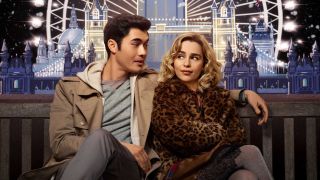 After the first Last Christmas trailer was released, fans began to speculate that there cold be a dark twist in the movie. Could this romantic comedy, which centres on Emilia Clarke's Kate, a down-on-her-luck Christmas store employee who bumps into the too-good-to-be-true Tom (Crazy Rich Asians actor Henry Golding), be as feel-good as the trailer implies? One major theory posits that Golding's character is actually a ghost, while another suggests he could be a figment of Kate's imagination.

Whatever the case, director Paul Feig, who previously helmed Bridesmaids and the Ghostbusters reboot, has teased a happy ending. Speaking to GamesRadar and Total Film, he said: "All my movies are good-natured and uplifting. Even when they’re dark, like A Simple Favour [a mystery thriller starring Anna Kendrick and Blake Lively], even that’s uplifting at the end. I never make a movie to upset people, so I think people will be very happy with how it pans out."

The filmmaker went on to discuss how it's difficult to make a "straight comedy" as people are "very hostile about something that exists to make you happy." He said: "Whenever I put out a trailer for one of my more comedy comedies, it’s met with as much hostility as people who are excited by it. People go, “Oh you’ve ruined it, all the best jokes are in the thing.” I feel like there’s a feeling of, “How dare you try to make us happy! How dare you just try and give us something light that doesn’t mean anything!” It’s a very weird thing... I’m never going to do something that doesn’t have a positive message at the end. So you can expect that from this."

Read our full Q&A with Feig, in which the director talks about the music of George Michael and whether there could be a sequel to Bridesmaids.