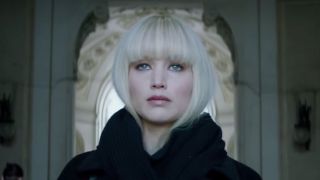 Marvel has yet to get around to making a Black Widow solo movie, and based on comments MCU head honcho Kevin Feige made to Deadline in 2016, such a film won't be coming until well after Avengers: Infinity War. But actress Jennifer Lawrence and director Francis Lawrence (no relation) are here to pick up the slack with the upcoming Red Sparrow, which just debuted its first teaser:

Jennifer Lawrence plays Dominika, a beautiful Russian ballerina who is sent to the "Sparrow School." There, she is taught to be a seductress and spy. As for Black Widow, the Marvel Comics heroine is also a Russian ballerina who gets sent to a secret training facility to become a seductress and spy, though her version is called the "Red Room." See the similarities here?

Red Sparrow is an adaptation of a book of the same name, written by Jason Matthews. Matthews is an honest-to-goodness former spy who worked for the CIA, which lends that extra bit of authenticity to the proceedings. That isn't to say there aren't some fantastical elements, however. In the book, Dominika has synesthesia, a condition which blends two or more of a person's senses - allowing someone to see music, for example. In Dominika's case, her synesthesia allows her to see a person's emotions through color.

It's an interesting premise, and we won't have to wait long to see how similar (or different) the final product is from Marvel's own superspy tale. Red Sparrow premieres on March 2, 2018.