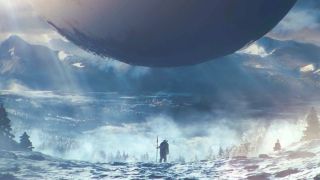 So Destiny 2 has been revealed. You’ve seen the trailers. You’ve seen the first gameplay. You’ve heard the broad strokes of the new, socially-minded structure and the vastly more fleshed-out open-world planets. But there’s one thing you haven’t done. You haven’t played it.

I have, in both campaign and Strike modes, and believe me when I tell you that while things are immediately, reassuringly comfortable and welcoming, this is not Destiny as usual. There are changes throughout, obvious and subtle, all of which stack up to create a fresh, exciting new iteration of Destiny that is both exciting in the immediate moment, while promising very big, very exciting things for long-term play.

Let’s not waste any more time, shall we? Let’s get into it. Starting with the most immediate, obvious point…

The gunfeel is better than ever

There was very little chance that Bungie was going to screw this up, but just to get it out of the way, the simple act of readying, aiming, and firing a gun still feels glorious. Possibly even better than before, actually. Maybe it’s just the influx of fresh new fire effects, sounds, and weapon properties facilitated by a full sequel, but Destiny 2’s shooting feels tighter, snappier, more immediate, and overall just more instantly gratifying than the first game’s already did. Every trigger pull is an instant, latency-free, direct, clean expression of your combat-will. The free flow of strategy, action, response, and reaction between brain and barrel is seamlessly on-point, whatever weapon is being wielded. And speaking of weapons…

Forget the old divisions between Primary, Secondary, and Heavy weapons. Destiny 2’s system has no such boundaries, and although initially confusing, it works very, very well indeed. Now, guns are defined by the kind of damage they put out, not their size or function. Kinetic weapons do neutral, hard-hitting damage, just like the Primaries of old. Energy weapons are for strategic shield-killing, and Power weapons, well, they have power. Beyond that, there are no restrictions, except that weapons capable of a one-hit kill (shotguns, snipers, fusions, etc.) are the sole preserve of the power category, meaning you'll get less ammo for them. A pulse rifle can be an Energy weapon just as easily as it can a Kinetic, and if you want to equip, say, two scout rifles at the same time, then you can.

The upshot is that tactical and preferential approaches to combat are now entirely player-driven, and fully open to interpretation. No longer will you need to put that otherwise unloved Sniper in your secondary slot just to fulfil the demand for a particular type of damage in a Strike. With any gun able to function in any required, situational function, all that matters is the way you want to hit it. And, after Rise of Iron’s steps toward a freer, more customisable sandbox, that’s going to blow class-building wide open.

The first Destiny’s super moves are undoubtedly, catastrophically powerful. But not all of them feel as brutal to use as they are in practice. The Warlock Sunsinger’s Radiance, for instance, for all of its visual pop, effectively boils down to throwing a load of grenades in quick succession. Bloody handy in a tight spot, but just not that thrilling to trigger. Based on current, hands-on evidence though, Destiny 2’s supers feel downright apocalyptic.

The Titan Sentinel’s super, for instance, is a literal superhero power-fantasy, turning you temporarily onto Captain America, complete with throwable, rebounding, downright marauding energy-shield. And as for Dawnblade Warlocks… Good Lord, that Warlock super. Launching you into the air, manifesting a flame-sword, and letting you rain down insta-kill fire for what feels like far too long to be fair, it effectively delivers flight, excessive melee damage, and staggering ranged power all at the same time. Firing it up to cleanse a battlefield really feels like using three supers simultaneously. And on the subject of combo powers…

Here’s where things really get exciting. Because while all of Destiny 2’s new combat additions feel fantastic in their own right, once combined it becomes very clear that the game’s new open-ended combat sandbox is being designed with serious creative power at its core. Take the new grenade launcher weapon class. Its quick, snappy, pop-boom shots are a hoot to use on their own, but when mixed into some of the Dawnblade’s new abilities, the gun becomes so much more.

Leaping high above the battlefield, I discover that a new version of the old Sunsinger’s Angel of Light perk - which allows Warlocks to float in the air when aiming - is a passive ability. I immediately do the logical thing and start throwing precisely-aimed explosive death out of the sky. So far, so good. But later, with my super charged, I happen upon an idea. I proceed as before, hanging in the air and firing grenades at the mob. But then, once my launcher is empty, I trigger my super and follow up explosions with flame, still suspended in the sky.

But it’s not over yet. I now have a third, passive class ability which sits alongside my traditional grenade and melee recharge meters in the HUD. It allows me to perform a floor-shaking ground-pound when airborne - and which gains fire damage during super activation. I link that in as well, effectively making my Warlock’s body the third weapon in my air-to-ground barrage. It honestly almost feels like pulling off a powerful, cunningly crafted combo in a fighting game. And this is just on day one, with a single subclass available, alongside the smattering of weapons Bungie has deigned to put in the reveal build of the game. Imagine this scaled up to a fireteam of three Guardians, each packing three subclasses each and a hoard of Legendary weapons, and you have the foundation for a veritable theme park of creative carnage.

As for managing this stuff, ye gods is that easier to do on the fly in Destiny 2. The subclass screen (located just off the pause menu, as ever) is now presented as a series of diamonds, laid out in groups across a spacious spider-diagram. Each set of abilities - be they related to grenade and melee, passive abilities, or variants of supers - is clearly and logically presented in isolation, meaning that understanding and retuning your class’ potential configurations is as breezy as can be. No more poring over blue circles and trying to remember where each power sits. When you need to change your set-up between fights, all it takes is a couple of seconds, a quick scan and a click or two, and you’re back in the action and good to go, It sounds like a small change, but it makes a drastic improvement to Destiny’s game-flow.

Level design is even better crafted than in Rise of Iron

Forget the (admittedly very fun) vagaries of vanilla Destiny’s mission design. If the more deliberately paced, more cleverly scripted, entirely more cinematic campaign of the Rise of Iron expansion was a statement of intent, Destiny 2 feels like the realisation. That opening story mission alone feels every bit as dramatic when played through in real-time as it looks in carefully edited trailers. The battle through the burning, stricken Tower is Bungie operating at the peak of its skills in level-craft, with action, environment and narrative operating in a seamless feedback loop of resonance.

Fighting through the main Tower courtyard is particularly powerful, the cannily sustained, multi-stage battle lasting just long enough to allow you to refocus and reinterpret the architecture we’ve seen a thousand times before during Destiny downtime. The steps above the Vanguard Hall are morphed into a desperate defense point, and the plateau upon which we used to dance, shop, and play bumbling approximations of soccer is now a lethal no-man’s-land. With the post office and Eververse store now acting as a dangerously on-fire staging post for desperate fight-backs, and that horizon - that cool, blue canvas upon which we’ve taken countless, PS Share selfies of wistful Guardians - all flaming rage and desperate chaos, the effect is powerful on an immediate level, and as a statement about the wider Destiny journey.

And then there are the scripted set-pieces, when an indignant, almost out-of-control Ikora Rey breaks the composure that’s defined her for the last three years, to take on a Cabal shuttle  hand-to-hand. Or when cheery peripheral NPC Holliday finally comes into her own to save my ass is a glorious, Big Damn Hero moment. And the more gameplay-driven variants, such as in the Inverted Spire Strike I play later, where the on-foot traversal of a vast quarry demands a careful, co-operative balance between clearing Cabal threats in the middle distance and manoeuvring around gigantic digging blades screaming in from behind them.

All of this is wrapped up in a notably glossy new sheen, to boot. While Destiny 2 might not look a vast visual upgrade from the outside, in-game the improvements are certainly more pronounced. Everything looks cleaner and sharper than in its predecessor, but it’s the new environmental effects that really push things over the top. With rain, fire, light, and more explicit, ambient animations filling the environment, the sheer sense of motion makes everything feel more alive than it ever has before.