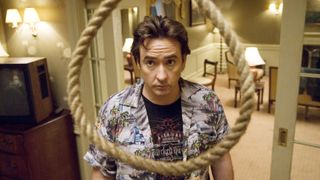 Cinephiles will scorn, glass may shatter, and cities could collapse, but I think it’s about time viewers ventured away from the comfort of the best-known Stephen King adaptations and sampled a few lesser-known – but equally credible – movies instead.

Ask a person in the street to name the greatest King film and they’ll invariably answer Frank Darabont’s The Shawshank Redemption - even if Darabont’s The Green Mile reigns superior in almost every conceivable way. But I want to shine the spotlight on three underappreciated, non-prestige-pic gems.

Firstly, Mikael Håfström’s 1408 (2007), a skin-rippling horror based on King’s 1998 short story. A mesmerising John Cusack plays plays Mike Enslin, an emotionally battered writer who checks into the Dolphin Hotel’s room 1408 - “an evil fucking room,” as Samuel L. Jackson’s hotel manager succinctly puts it. It’s no spoiler to say that things go tits up for our hero, but it’s the lean, mean mechanics of exactly how it happens that distinguish the film. Here, we aren’t coddled by any crescendos of rain-pelted freedom; there isn’t the security blanket of a Morgan Freeman voiceover to cling to. 1408 is all tension, no release, nailing the nightmarish tenor of King’s writing.

Clearly, 2007 was a banner year for King films: it also brought us The Mist, Frank Darabont’s third go-around with the author. Shorter and tauter than the director’s earlier prison dramas, The Mist is a superb ensemble piece mainly set in one location, a supermarket, which becomes a hollow stronghold of sorts as monsters stomp into town. There’s no Kubrick-style symbolism to puzzle over; no wild-eyed Jack Nicholson hogging the spotlight. Showboating is shunned in favour of suspense, which Darabont nurtures masterfully all the way to the devastating climax.

I’d also like to make a case for 2003’s much-derided Dreamcatcher. Panned at the time by critics still under the spell of The Lord of the Rings, Lawrence Kasdan’s sci-fi deserves a second look for its uniquely bleak depiction of an alien invasion, not to mention a pre-Homeland Damian Lewis going on the rampage. It seems, then, that a number of Stephen King adaptations have been as unfairly shut away as Andy Dufresne… or is it just me?

– Should we just do away with movie trailers? argues Simon Kinnear