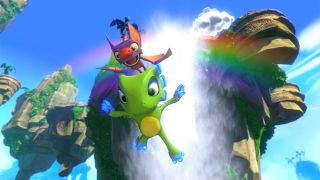 When a group of former Rare employees set out to make what would become Yooka-Laylee in 2012, they wanted to recapture the magic that came from Banjo Kazooie. They called it a ‘Rare-vival' and after an incredibly successful Kickstarter campaign, they knew fans wanted a return to 3D platforming as much as they did.

The revival didn't go as planned once Yooka-Laylee launched in 2017 though, players weren't happy with the games clunky camera, lack of quality of life features, and weird character voices, among other problems. Yooka-Laylee was fun, but it didn't recapture the magic that Banjo Kazooie created all those years.

In an interview with MCV, the team at Playtonic discussed the issues they ran into while developing Yooka-Laylee. They looked at the original vision they had and talked about how  player expectations were different than what they had envisioned.

“We had a bunch of different ideas but one of them was to really revisit things from the games that we love from the past and try to bring them back,” said Playtonic co-founder and Yooka-Laylee project director Chris Sutherland.. “We believed there was a demand, seeing what people were saying on Twitter and other platforms online. So we thought: these games do have an audience and we’d like to bring them back.”

“We thought that it would resonate with people more because there weren’t that many of those kind of games out there,” he added as to why Platonic went with a 3D approach instead of 2D. “Collectathons seem to have dissipated or maybe more mature games now had those aspects in them. But they vanished as a thing in themselves so there was a gap in the market and we talked about how it would help to stand out more if we made that game then.”

Sutherland added that he wished they had started with a 2D project, which is something Playtonic is doing now with Yooka-Laylee and The Impossible Lair. Sutherland and several other members of the team looked at what went wrong with their vision to try and capture what they loved from classic collectathons.

“Where it didn’t work so well maybe was the camera because we were trying to bring back the style of the camera that we had when those first 3D games were coming out. The cameras tended to take the approach of trying to sort things out for you and trying to position themselves in intelligent places," Sutherland said. “So we went along that route because the way the camera frames the player [is part of the] feel of these games. But the way that works means it could actually end up disorientating the player and I think that’s something that we realised maybe slightly later on."

The team added that both the camera and the voice acting had been changed through a patch soon after launch, but they still wished they had started at that point.

“I guess things have moved on so much since then. Voice acting is very much the norm now and maybe they saw it as a backwards step," said Technical art director Mark Stevenson The other thing is a lot of the fans, that were funding this project into life, were kids when they were playing [Banjo-Kazooie] so I don’t know, maybe their tastes have changed.”

Looking to revisit some other platformers after learning more about Yooka-Laylee's development? Check out the best platform games ever (that aren't Mario).