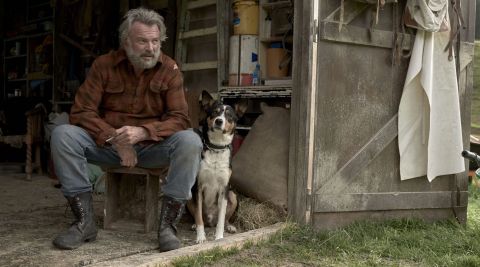 In good news for Thor-watchers, Ragnarok helmer Taika Waititi has strong form in making familiar-looking material his own. With 2014’s What We Do in the Shadows, the Kiwi energised vampire, found footage and bro-com staples with rich-blooded reserves of madcap comedy and outsider empathy.

For his follow-up, he’s infused a standard odd-couple coming-of-ager – grumpy old bugger and awkward teenager bond on a wild adventure – with just the kinds of wonky humour, natural charm and generous spirit required to disarm all-comers.

One accident and several misunderstandings later, the Tupac-loving teenage haiku-writer and illiterate mountain man are forced on the lam together, with a prickly air between them, the law behind them and a lot of mountain bush all around.

As for what’s ahead, you don’t need a map of New Zealand’s North Island to know where this testy twosome are headed. (Memories of Pixar’s Up and Neill’s Jurassic Park character will give you some clue). But over-familiarity hardly matters when the sparks of chemistry needed to heat up old genre coals are so winningly struck by Dennison and Neill. In his most likeable lead since he was a good dog in 2008’s Dean Spanley, Neill locates the warmth behind Hec’s exasperated glances with lovely ease.

A slew of lively cameos, meanwhile, and off-piste action/comedy gambits don’t just keep us alert: they also illuminate the main narrative in more engaging ways than a literal, message-bashing approach might. Hairy encounters with wild boars and tension-stoking chases (fronted by a gamely OTT Rachel House as child-services nutjob Paula) should silence any MCU mavens concerned about Waititi’s ability to combine action with focused character investment.

As for cameos, Waititi’s hysterical skit as a vicar sums up his comic pitch: ribbing, but never cruel. That kindly spirit is shared by Tioreore Ngatai-Melbourne’s turn as a sausage-bearing friend to Ricky, while Waititi’s more crackers wit gets a vigorous showing in Rhys Darby’s Psycho Sam, a bonkers conspiracy theorist with more thematically on-point things going on under his tin hat than we might suspect.

Although Waititi’s plot zigzags erratically, his sympathies sit surely with society’s outsiders, not the mainstreamers dismissed by Sam as “form fillers”. Whether or not Waititi can bring that spirit to Asgard, it comes across lovingly here.

Hunt For The Wilderpeople