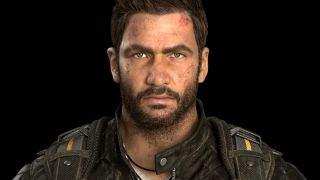 Like so many open-world games, Just Cause 4 gives you the freedom to do some absolutely absurd things. Series star Rico Rodriguez makes Batman look like a grappling hook amateur, and his high-tech gadgets let players wreak havoc in ludicrous, physics-driven ways (including these 7 ridiculous things I did during 4 hours with Just Cause 4). But despite all the wanton destruction of property, the Just Cause games still endeavor to tell engaging stories, with Rico fighting on the behalf of disempowered people. Though you might be zipping around like a flying squirrel with an uzi during gameplay, the cutscenes establish Rico as a hardened hero for the people of Solis who have been under the boot of the Black Hand mercenary company for too long. It's definitely a pivot in direction compared to the previous game, whose main villain was a cartoonish, mustache-twirling dictator. And in talking with narrative designer Ben Jaekle and lead mechanics designer Hamish Young, it sounds like Just Cause 4 is trying to find the right balance between silly and serious.

"We came out of Just Cause 3 with kind of an odd feeling, like maybe we'd gone a little too far in [the direction of] goofy," says Jaekle. "So what we wanted to do with JC4 was refocus the tone of the game, and to make it less about extraordinary things happening, and more about ordinary, believable people encountering really extraordinary situations." Said situations usually involve Solis' extreme weather conditions, like colossal tornadoes or sudden tropical storms. "What does someone say when they're in the middle of a firefight and a tornado barrels through?" Jaekle says. "Is it funnier when they say something really quippy and cheesy about the tornado, or is actually funnier when they react the way a real person would react to a fuckin' tornado rolling through your combat zone?"

"So we kind of doubled down on that - and yeah, at face value, it kind of feels darker and more serious and more mature," Jaekle continues. "But I think when you play the game, you'll realize as you move through the cutscenes and you encounter the characters and get into the world, that it's not really darker or more mature - it's just a little bit more grounded, and a little bit more real. Which I think creates a really powerful and important contrast with the kind of madness that happens when you encounter things like extreme weather, or when you behave in the world the way a character like Rico behaves. And I think that contrast makes it much more fun and enjoyable."

Let the bodies hit the floor

Rico is also the kind of hero who doesn't take issue with gunning down hundreds of mercs, and frequently sets off explosions that could quite easily engulf nearby innocents. Contrasting those actions with a believable plot evokes the struggle of other series like Uncharted, where there's a discrepancy between story and gameplay that some highfalutin folks call 'ludonarrative dissonance.' Young finds Just Cause 4's open-world sandbox to be a more lenient place for a hero's chaotic actions than a guided experience like Uncharted 4, though he's not fussed either way. "I don't think we get quite into the same kind of weird balancing act that Uncharted can feel like at times, although I think people are very used to the gameplay convention of the combat design needing X number of people to shoot," he says. "It can feel a little bit weird, but I don't think it's as big a deal as maybe people make it out to be."

Jaekle agrees, though the hero's background certainly plays a part. "There's also a really fundamental difference between who Nathan Drake is and who Rico is," he adds. "Nathan Drake is cast as this kind of everyday guy, who plays PlayStation with his wife - and then he goes and murders 1,000 people with a machine gun, right? But Rico actually is a soldier, one of the best soldiers in the world. And he's taking on a pretty evil force of people. So yeah, the bodycount comes out pretty high - but the results are that Rico is a person who's kind of built around that idea, and the war he's fighting... his cause is just, if you will. Therefore, I don't think we encounter quite the same dissonance that some people feel when they get out of an Uncharted game."

It's also ok if the occasional buggy-looking bit of physics exists in Just Cause 4's grounded world. "Obviously we have zero tolerance for anything crashing; we work very hard to make sure the game is stable and performing and all those things," says Young. "But if, for example, you attach a booster to a car and it spins a little bit too fast - as long as its an enjoyable outcome, it's not a bug, it's a feature, you know what I mean? So we try to build systems to be very robust and combine in solid ways, but we don't try to cover every edge case in a way that would take the fun out. We'll cope with the odd weird thing happening if it means that you can do all the things you can do."

Jaekle puts it rather succinctly: "You don't create chaos and then hope it goes according to plan - you just plan for chaos."

Read up on all kinds of open-world chaos in our recent Just Cause 4 hands-on preview.