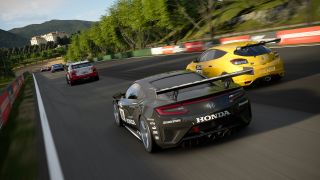 It's inevitable that there will be a new Gran Turismo game and from what's been rumoured so far, it’s looking like being an early appearance on PS5 - possibly even a launch title. There have been some concrete details from its developer, Polyphony Digital, and some rumours from sources that proved reliable with other leaks. So what are we looking at from Sony’s flagship racer? Let’s look at what we know so far about Gran Turismo 7.

Gran Turismo 7 release date - When will it drop?

While unconfirmed at this point, rumours point to the game releasing on November 20, 2020, alongside the new PS5 hardware itself. That doesn’t seem that far out of whack compared to other console launches, cashing in on the Christmas rush. Just imagine the excitement of unwrapping a Gran Turismo-branded PS5 console on Christmas Day, and playing Gran Turismo 7 as among the first of the upcoming PS5 games.

Will it be called Gran Turismo 7, or GT Sport 2?

Good question, though Polyphony Digital’s Kazunori Yamauchi told us several years ago that, in hindsight, GT Sport probably could have been called Gran Turismo 7 after all – something which is truer than ever now that there’s a greater single-player element that’s been patched in for free since its release. But when you also keep in mind that he said later: “I think the next title that we’re going to create will be a combination of the past, present and future – a complete form of Gran Turismo”, it’s very likely that we are looking at a game that retains the online competition of GT Sport while re-introducing deeper, solo elements of the game which have been missing for some years now.

Yamauchi has admitted recently that he rarely used to play the old entries in the franchise, though having done so again recently, he’s realised how much of the old games he has forgotten. He said also that, having spent a while travelling the world, he has heard from a great many players who still love Gran Turismo 2 and Gran Turismo 3, and that the reasons for that love are also elements he had forgotten. So the smart money is indeed on the game being called Gran Turismo 7, and being the most full-featured Gran Turismo title ever. That does mean that PS4 won’t have had a single numbered Gran Turismo game, but considering the development cycle and Polyphony’s first-party status, the three years since GT Sport’s release have almost certainly been spent with PS5 in mind and we’re perfectly fine with that.

Virtual reality is one of the things that really excite lead designer and director Kazunori Yamauchi, as he has gone on record to say that VR is one of the areas that will benefit most from the technological advances offered by the new hardware. Yes, that does sound suspiciously like someone who’s been playing around with the new hardware. It also looks likely that PSVR 2.0 will launch alongside PlayStation 5, making PSVR 2.0 more of a core pillar of PlayStation entertainment rather than a side show released later on. Clearly if this and the game’s launch title status are both true, it would make perfect sense for Sony to show off their new VR hardware with a true graphical showcase. Gran Turismo has always fitted that description, not to mention keeping up with visual trends. GT1 showed off pseudo environment mapping, GT3 showed off real environment mapping, GT5 introduced 3D TV support... and that’s actually why the next rumour is also a distinct possibility.

Gran Turismo 7 8K support… can it really do it?

8K is a TV resolution that’s double the pixel density of 4K TVs, which is effectively 16x the detail of full HD, which is pretty hard to imagine if you’ve never seen it with your own eyes. It’s undoubtedly one of the resolutions we’ll be dealing with in the future, but right now full 8K support in Gran Turismo 7 still seems unlikely. But the fact is, this has already happened, in a way. Sony saw fit to show off its new range of 8K TV sets at trade shows by running an 8K demo of Gran Turismo on them. Whether it was running on a PS5 dev kit is unknown, and while PS5 will support 8K output, the console almost certainly won’t support 8K gaming for most titles, if at all. But don’t forget that the very first Gran Turismo game features a ‘Gran Turismo Hi Fi’ mode which strips back some of the graphical detail and runs the game engine at 60fps, compared to the regular refresh rate of 30fps. Does it not seem highly plausible that new Gran Turismo could feature a similar 8K mode just to show off an 8K TV is you have it? Sounds more likely than not, if you ask us.

Well this is an interesting one. Gran Turismo’s original circuits are rarely championed, but many herald from the late 1990s, an era during which bespoke track design was an art form and, with the basic graphics of the time, the quality of the driving experience itself was of vital importance. So the lack of many of the classic circuits in modern GT games – namely Trial Mountain, Deep Forest and Grand Valley - is lamentable. Yamauchi confirmed to GTPlanet that the code for Deep Forest has in fact been running in GT Sport, but not implemented in the released game because of a few issues, saying: “The problem that we had with some of the older tracks from previous Gran Turismo games was the scale being off in certain places. The size of the trees are very large, or the width of the curbstones, etc. There were curbstones that were wider than cars! If we want to bring that into the quality of GT Sport now, there is a lot that we have to redesign, and it is not that easy.”

However, some nifty reverse-engineering of the GT5 code has in fact revealed a wealth of old circuits present and playable in the game, albeit hidden away and inaccessible through normal gameplay. But the fact that they are all in there suggests that the intention may have been there to include them in some form, but then abandoned. The smart money is on the tracks returning, but with all-new, ray-traced visuals for PS5.

Want more new games to get excited about? Here are the upcoming games for 2020 and beyond to add to your watch list.

Justin Towell
Justin worked on the GamesRadar+ staff for 10 whole years. Imagine that. Now he is a contributor, specialising in racing games, retro, and Sanic.
See comments
Gaming deals, prizes and latest news