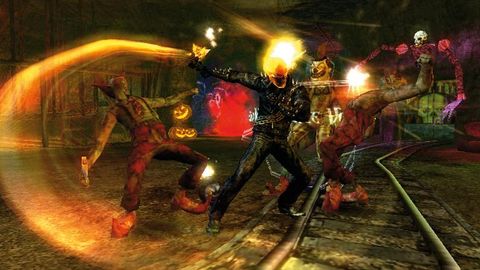 As if the back-catalog of shoddy comic book adaptations on PS2 wasn’t shameful enough, here’s another uninspired and under-developed calamity for the pile. You play Johnny Blaze, a motorcycle stunt rider who sells his immortal soul to Mephisto (a sort of Marvel Universe version of the Devil) in order to save his terminally ill father from cancer. Bit of a short-sighted deal, really, especially when Mephisto turns round and offs his dad after he’s cured him. As you’d expect, Johnny’s a tad peeved by this, but by now he’s been transformed into the soulless Ghost Rider, and he’s trapped in Hell.