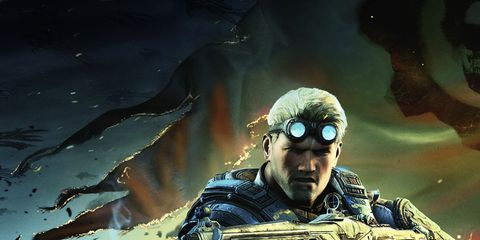 Prequels can be restrained by destiny. Their future is predetermined--set in code and sitting on shelves. They're imprisoned by predestination, so they usually either overexplain plot points or tread water for fear of confusing canon. People Can Fly's Gears of War: Judgment doesn't fall victim to these follies; instead, it focuses on a smaller, more personal story and changes to pacing that embraces arcadey, fast-paced gameplay. The result is not only an incredible action game, but the most enjoyable Gears of War game yet--plot holes be damned.

Set nearly a decade before the original game, Gears of War: Judgment drops you into the incredibly heavy boots of Kilo squad, led by then-lieutenant Damon Baird. The team, which also includes former Thrashball star Augustus Cole, Onyx Guard Academy graduate Sofia Hendrik, and Garron Paduk (who fought on the enemy side during the Pendulum Wars), is sent on a basic mission that spirals out of control. It goes so poorly that the foursome is dragged into an impromptu court in the middle of a battlefield and forced to recount the previous day's events, with each act consisting of a squad member's testimonial.

It's a great setup that allows Kilo squad to shine. The characters have wonderful chemistry, and there's a good chance you'll care more about Sofia and Paduk than you have most of Gears of War's characters outside of the core group. Cole and Baird are fun as well, but they lack the playful camaraderie shown off in other Gears' games, resulting in the largest missed opportunity in Judgment. This is made up for by the world itself, which is absolutely full of character, feeling more alive than it ever has before. Sera is still in ruins, but the remnants of the old world are more apparent, making for a familiar but fresh setting. Though some elements of the story don't really fit in with the timeline (Lancers weren't actually invented until several years after the game takes place and Lambent wouldn't come to the surface for another decade), the questionable choices were made in the name of gameplay variety. Odds are you won't mind continuity bumps on your roller coaster ride through Sera.

And you'll see a lot of the planet as you cruise through Judgment's six acts, each of which is broken into multiple chapters that concluded with a score screen that displays stats and increases your level, unlocking multiplayer customization. The score screens have the positive effect of adding reasons to replay levels. However, this structure negatively impacts Judgment's pacing, giving it the feeling of pumping a car's brakes. There's never more than twenty minutes without a hard stop and score breakdown.

The flashback story structure is amplified by Declassified Missions, which have a large effect on the gameplay. Each chapter includes an optional modifier that you'll need to take to earn the maximum number of points for an area. Some simpler instances will lower your ammo or force you to use specific weapons, while others can totally transform the level, adding a dense fog or additional objectives to totally change the pacing of the battles. These modifiers add an element of randomness, enhancing every mission in the game with fun, flavorful variances. This, mixed with the point-based gameplay and multiple difficulty modes, make Gears of War more replayable than ever--and that's saying a lot. There's also a full two-hour epilogue to the story that takes place during Gears of War 3, extending the playtime slightly (even if the lack of Declassified options make them feel detached).

While focusing on action would have worked even without gameplay changes, the alterations to the controls have made Gears of War's combat much smoother. It still has the incredible weight that Gears games are known for, with massive, tank-like heroes tumbling around in heavy armor, but it's simply an easier game to control. Tossing grenades is as simple as tapping a shoulder bumper (instead of needing to actively equip one before throwing it) and swapping weapons is done with the Y button. Though these might seem like minor alterations, they help to make it play more fluidly, and have a large, positive impact on the speed of play.

The speedier gameplay is helpful when battling through Judgment's encounters, which focus more on large groups of weak enemies as opposed to a smaller assortment of powerful ones. You'll still face plenty of Boomers and Reapers, but they're surrounded by dozens of grubs that are fun to carve apart. The only thing holding back the encounters is occasionally questionable enemy (and ally) AI that has the potential to make even the most epic battles look unintentionally comedic. Four-player co-op fixes this, but it's still frustrating when enemies and allies run in circles around each other instead of actually taking part in battles.

As usual, Gears of War's newest entry comes with a strong multiplayer component that'll keep you blasting friends into chunks of meat for dozens of hours after you complete the campaign. Judgment includes the typical assortment of modes shooter fans have come to expect, including the newly-added free-for-all, as well as fan favorites capture-point and team deathmatch. Every mode is enhanced both by the new gameplay changes and the addition of UIR weapons, which fill the gap between the COG and Locust weapons with a variety of mid-range, powerful guns. The included levels are well-designed and varied, but there aren't that many of them to choose from, so you'll be wanting for more locations before too long.

The biggest addition comes with Survival Mode, Judgment's take on the popular Horde game-type. At its core, Survival fills the role of wave-based co-op vs. AI gameplay, but adds in classes (letting you choose between an engineer, scout, medic, and soldier) and multiple points which need to be defended. It's more accessible, but also requires more cooperation, adding in additional tactical depth that makes Gears 3's Horde feel somewhat basic by comparison. Some might miss the primal "kill anything that moves" flavor of Horde, but the class-based gameplay in Survival is smart, and made even more varied with OverRun--a version of Survival where a second team controls the Locust horde launching attacks on the defensive Gears.

Judgment evolves the franchise, giving it a strong, new identity without diminishing the events of the original trilogy. Declassified Missions are a brilliant concept that are executed in a great way, and the new multiplayer modes are worthy successors to Horde. Gears of War: Judgment tells a story that didn't really need to be told about a time that didn't need explanation, but it does it so well you'll be happy to take a trip back in time for a quick trial.