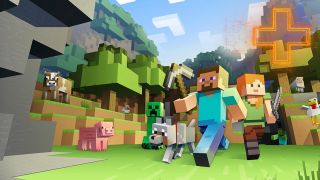 We're celebrating the end of an incredible decade for games, movies, and TV shows. Minecraft is one of the games that defined the last 10 years of play, placing 13th in our 100 best games of the decade rankings. Read on to find out why...

This virtual Lego game has never been one for hard and fast rules: as such, it seems fitting that it bend our Games Of The Decade parameters ever so slightly. Minecraft 'Classic' may have been released to the public in 2009, but it was 2010's alpha version – the game's first major update – that truly took off, so much so that creator Markus 'Notch' Persson could afford to quit his day job and found his own company. It hit version 1.0 in 2011; three years later, Persson would sell Mojang, and the rights to his plucky little Infiniminer tribute, to Microsoft for a cool $2.5 billion.

The story of Minecraft is almost unbelievable. From the humblest and most unassuming of origins – crude cubes of dirt, able to be picked up and placed at will by the player around a blocky world – sprang a phenomenon the likes of which the game industry had never seen. Having had Microsoft at its back for the past five years, Minecraft has grown from indie smash hit to pop-culture keystone. Its boss- eyed characters adorn the bedsheets of children across the globe; an 'Education Edition' is used in classrooms; and the world's most famous streamers continue to discover and rediscover its magic, helping keep it ever-present in the video game scene's collective consciousness.

There seems to be no end to Minecraft's capacity to delight, nor indeed its potential. Much of this can be attributed to Mojang's dedicated team, who, now with original programmer Jens Bergensten at the helm, continue to provide regular, quality updates and additions (returning to Minecraft after a stint away is frequently surprising, as explorable shipwrecks or polar bears appear where once there was only trees and dirt). But the reality is that even if it were never updated again, Minecraft's immortality would still be guaranteed. It is a portal to limitless creativity.

It was assembled on enduring foundations: clever procedural generation that creates giant explorable worlds where impossible landmasses could spring up around any corner, a compulsive RPG structure and endgame that prompts players to work towards specific goals. But the key to Minecraft's timelessness is the creativity it encourages in its players. Famously, Minecraft – at least the definitive version – offers no tutorial for any of its mechanics, including its 3x3 crafting grid. From the off, players are trusted to figure out the limits of the game for themselves; as a result, they frequently push past them.

This is a game that treats its younger audience with the same respect as it does its grown-up players, and is adored for it. Minecraft and its communities have brought us scale models of Westeros, working computers engineered with the redstone system, the battle-royale genre, parkour courses, a player-created mythological horror in the form of Herobrine and more besides. Minecraft proves that, as long as you provide the right tools to your players, refusing to define the rules can be transformative – and was perhaps the first- ever video game to teach us that a virtual world can be whatever you make of it.

This feature first appeared in Edge magazine issue 339, as part of its celebration of the games that defined the decade. For more industry-beating access to the very best that the video game industry has to offer, why not subscribe to Edge?