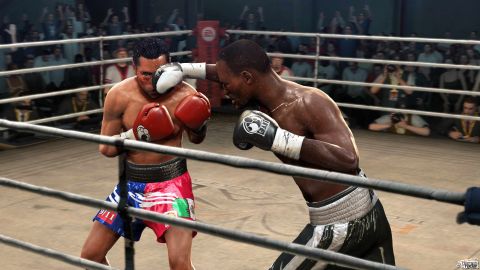 Few games make the process of throwing and landing a punch as satisfying as Fight Night Round 4. Knowing that you have timed the angle of your fist to catch your opponent so sweetly their head reels back with the force is a constant joy.

Back in 2004 EA introduced Total Punch Control, a system that replicated the shape of a jab, hook, uppercut or cross depending on how you moved the right analogue stick. For us, it revolutionised the genre and made Fight Night one of the most intuitive simulators out there. That’s not to say it was perfect though – issues with the speed of the fighters, what punches connected and an overly simplistic career mode were all fair criticisms of the game. You’ll be glad to hear that in the last couple of years since Fight Night Round 3, the developers have ensured that we can’t level the same complaints twice.

The most significant improvement is one that you might not realise if you haven’t played a Fight Night title before – the collision detection. In past games, fists have ‘clipped’ through bodies, punch animations could be halted mid-throw if the opponent got to you first and there was always an imaginary wall that stopped you getting up close and personal with your combatant. Now, if a punch is thrown and it’s close enough to land, it will – hooks will glance off forearms, uppercuts can break through guarded elbows and jabs can land simultaneously if each fighter attacks at the same time. This, in turn marks out a huge difference between ‘in fighters’ (who like to fight at close range) and long distance ‘out-fighters’ or ‘sluggers’.

The speed of each match has also significantly increased over previous games. Swarms of punches can be thrown in quick succession and combination attacks feel far more fluid. Now, each fight is sweat-inducingly intense and fast-paced. But perhaps best of all is a greater emphasis on counter punches – well-timed return shots can instantly stun an opponent and turn a fight completely around, without it feeling cheap or unfair. In fact, knowing that a few sweet punches can result in an early knockdown encourages ‘proper’ technical fighting in addition to all-out brawling. In no way does the result of a fight feel pre-determined – each round requires you to maintain pressure and avoid being on the receiving end of an opponent’s lucky punch…

EA have also worked hard to ensure a greater degree of realism for the career mode. Whether you pick a famous Legacy fighter (like Tyson, Ali, Foreman or Hatton) or your own created boxer, you’ll have to work your way up through the ranks with careful scheduling. While you can book loads of fights in a year, and a better win/lose ratio can increase your ranking, setting up fights close together won’t give you any time to train. Arranging just a handful of bouts might give you plenty of time to train and improve your stats, but your slog up the championship standings will rise slower than your popularity.

With fame comes certain requirements too – just winning fights might not be enough to secure a good Legacy Rating. As you rise from ‘Bum’ to ‘Greatest of all Time’, you’ll need to schedule particular fights against specific rivals at certain venues to ensure you maintain your reputation.

Fans of beat-’em-ups such as Street Fighter 4 might not like it because it isn’t quick-fire combat and 10 second knockouts, while gamers who normally expect their boxing games to feature bobble-headed cartoon stereotypes might find it a little dry and serious. However, with a hugely accessible but technical control system, visuals so impressive you can see each bead of sweat fly off the fighters and a superb range of well-known pugilists to match up against each other, Fight Night Round 4 is by far the best boxing simulator we’ve played in years.