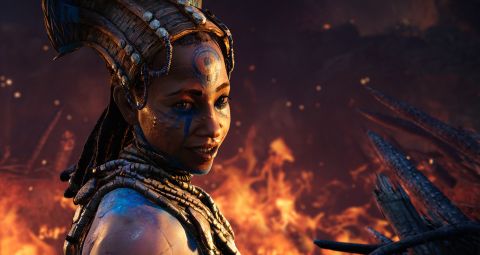 Primal takes the great structure of the Far Cry series, but little of its character. No clear goal and a limited arsenal end up making this feel a little prehistoric itself.

Blood on a pink suit. You play hours of Far Cry 4, inventing increasingly ingenious ways to rid the Himalayas of despotic goons, but that’s what you remember. Blood on a pink suit. Since it settled down into a mechanical holding pattern in its third iteration, Far Cry’s ace in the hole has been its presentation of villainy. The series’ looming Big Bads are part-narrator, part-finishing line and totally, seductively unpleasant. The only reason you remember the definition of insanity is because the guy telling it to you was so damn interesting.

Far Cry’s best trick is never more obvious than when it fails to pull it off. Primal - a new spin-off set in Central Europe, circa 10,000 BCE - attempts to include two villains, totally failing to make either feel threatening or engaging. Suddenly, it all becomes clear - in an open world, where you can go anywhere, being fed choices almost constantly, that evilly grinning focal point is there to keep you on an even keel, keep you working to set things right. And when it’s not there? Well…

Primal’s problem is one of focus. It’s almost mechanically identical to the previous two main games - an enormous open world crossed in first-person, peppered with quests, creatures, crafting and opportunities for psychotropic drug trippery - and as such carries the same simple pleasures. There’s a huge amount to kill, build, upgrade and discover, to the point that you end up essentially tripping over new things to do - but without the nagging sense that there’s something truly bad out there to stop, it quickly becomes a parade of busywork, with very little reward.

You play as Takkar, a man on a journey to the land of Oros, who reunites with the fragments of his lost tribe, the Wenja. The Wenja suck. Oros is also home to Neanderthalic cannibals, the Udam and technologically savvy farmers/firebombers, the Izila. The Udam are stronger, the Izila smarter - by Darwinian terms, the Wenja deserve to be extinct, and if the game is suggesting that we’re descended from them, humanity got a bum deal. It’s Takkar’s job to tip the balance. His course through the game leads him to collect together the scattered remnants of the tribe, forming a strong leadership, and building a functioning village in the bucolic valley he calls home. He does so by murdering almost everything he sees.

Hurk is an unusual tradition. The bearded, yelping Southern man pops up in both of the last two Far Cry games. In Primal we meet Urki, his prehistoric forebear, an aspiring inventor and the game’s comic relief. His best joke? He speaks the same made-up caveman language as everyone else, but in a thick Texan accent. Never gets old.

Primal’s somewhat old-school setting leads to perhaps the game’s greatest change - its approach to weaponry. Rather than the arsenal of ordnance available to contemporary protagonists, Takkar’s got a club, a bow, and a spear, plus a prehistoric toolkit of traps and primitive bombs. This limited selection turns Primal into a far more aggressive game than its predecessors, forcing you out of stealth and into melee combat almost constantly. Come the endgame, this can be spectacular, as you smash enemies out of the way like straw dolls. Unfortunately, its approach to melee is incredibly basic - you can’t even block, never mind vary attacks - meaning you’ll likely have gotten inured to it all long before.

That’s supplemented somewhat by Takkar’s quasi-supernatural ability to tame the game’s menagerie of animals. Collecting the game’s carnivores, bringing them to your side by feeding them bait and shushing their growls/roars/squeaks, became its greatest pleasure for me. Pets act as a tactical advantage, occupying threats while you choose someone else to brain. Again, it’s a shallow mechanic - your control amounts to just pointing your chosen animal where you want to go - but gaining the ability to ride a rare breed of Sabertooth Tiger into an enemy camp and watching lesser enemies flee is a new kind of thrill.

But it’s not enough. Oros is a spectacular place - alternating from thick, light-dappled forests through wind-spiked mountains to fire-ravaged wasteland - but it feels terribly empty for a map covered in Ubisoft’s increasingly traditional quest marker pebbledash. The Udam and Izila questlines make up such a short part of the game’s runtime, and end in such rote boss battles, that they feel sidelined. The majority of your time is spent running fetch quests for members of your village - always violent, but never important. Worst of all, the game’s ‘drug trip’ sequences are consistently more interesting than the main game. One is so ludicrously spectacular that it begs the question - why isn’t this spin-off taking its cues from the similarly surreal Far Cry: Blood Dragon?

Ubisoft Montreal might counter that Primal is more about wearing the skin of a man who wears skins, and there are hints of that in the game’s more survival-based ideas (degrading weapons mean you need to keep a constant stock of crafting materials, and snowy regions introduce a cold gauge that needs to be topped up by resting at campfires) - but it’s a half-baked attempt at introducing caveman role-play when you can also control an owl that drops bombs full of bees, because magic.

The result is a game that feels lacking in most respects. It lacks a clear villain, it lacks a deep enough armory, it lacks direction. Far Cry’s set-up is such that you’ll always be able to make your own fun - and, in the moment, it can be a beautiful, violent thing - but for a game in which characters talk constantly about being remembered by history, it’s a sad irony that - unlike their series forebears - they most probably won’t be.

Primal takes the great structure of the Far Cry series, but little of its character. No clear goal and a limited arsenal end up making this feel a little prehistoric itself.

Joe first fell in love with games when a copy of The Lion King on SNES became his stepfather in 1994. When the cartridge left his mother in 2001, he turned to his priest - a limited edition crystal Xbox - for guidance. And now he's here.
See comments