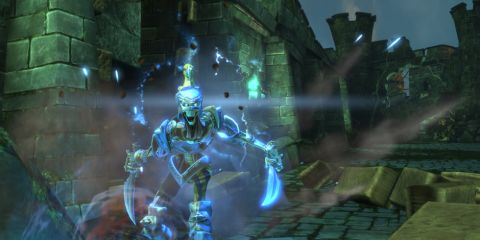 In theory, Fable: The Journey offers up a new way to experience Lionhead’s long-running role-playing series. The Kinect-only experience allows you to cast spells with one hand, grapple enemies with another, and duck and weave out of the way of projectiles by leaning. In execution, the game is uneven. While it offers an accessible introduction to the world of Albion, and some great potential, it’s neither the best Fable game nor the best motion-driven title to play.

Taking place 50 years after Fable III, The Journey puts you into the shoes--and magical gauntlets--of Gabriel, a young man separated from his tribe after a series of catastrophic events. While en route atop his trusty steed Seren to an alternate path to reunite with them, he rescues Theresa, Fable’s famed seeress, from the deadly and all-consuming Corruption. As they escape, Seren suffers near-fatal wounds, and Theresa leads them to a sacred temple to heal the horse. Gabriel does so by acquiring a pair of powerful gauntlets, which lets him cast spells with one hand and grapple enemies with the other. With that, it’s up to him to lead Theresa to the Spire to save Albion before The Corruption consumes everything.

While it seems like a typical “an unlikely hero must rise to save Albion” setup, The Journey’s play style is far from the typical Fable experience. To paraphrase Microsoft’s “You Are the Controller” marketing slogan for Kinect, your body truly controls the action, from pushing out lightning bolts to throwing out grappling lures. You spend a great deal of time in its on-rails presentation either steering Seren toward collectible orbs (which allow you to upgrade health, spells, and Seren’s durability) or keeping her out of the way of obstacles, all by gesturing with her reins. When combat pops up, you’ll take on a number of creatures, all with different methods of doing damage.

One of the elements at which The Journey succeeds is in building a bond with your horse. Lionhead has given Seren a great deal of personality, which becomes more evident as she takes damage. In near-death experiences, her wheezes and muted groans of pain evoke real empathy for a virtual animal. You’ll want to heal her with the gauntlets (one of their other magical abilities), pull spikes from her flesh, and clean the mud from her. And she’s well-animated, so there’s a sense of satisfaction when she does a happy trot to show that she’s good as new.

The Journey, at many points, resembles the theme ride version of Lionhead’s universe, even to the logical extent of providing a first-person minecart section. In that sense, it can be charming at times, showing off a whimsy to some of the characters Gabriel encounters along the way. If you’re looking for the Fable series’ deep moral choices and mature moments, you won’t find anything on that level here; instead the game does an effective job truncating the world into an experience that shows you Albion in an easily digestible fashion.

The caveat is that while the game looks poised to offer you an accessible, streamlined rendition of the series and what has charmed gamers across three core titles, it stumbles in execution. Fable: The Journey suffers from several core issues, but the most glaring is its dysfunctional mechanics. Although the game offers you a degree of flexibility as to where to cast your reels and shoot projectiles, it’s often imprecise as to where it lands. Even with multiple in-game calibrations, it’s never exact enough. Your arms will get tired not from epic battles, but from exerting more angered energy gesturing to get a feature to work properly.

The Journey is initially long-winded in explaining its mechanics, but it doesn’t offer much diversity through the span of the game. Sure, you’ll collect items from pint-sized side quests (with gestures to open a treasure chest, or pumping water into a trough for Seren), but for most of the span, it’s a rather sterile and bland litany of horse steering and wrestling with inaccurate controls.

What’s really frustrating is that when the gameplay clicks, it’s entertaining. At times, the rhythms of The Journey’s combat come through, as lightning bolts hit, enemies are stunned, and you clear a stage of creatures. It’s a game that feels like it has potential bubbling beneath the surface, but more often than not, it’s more driven by flails and hopes of a successful hit than a title in which you feel like a skilled mystical warrior. There are some great moments, like a battle against a massive monster, in which you deflect huge boulders back at it with your grappling hook that hits some satisfying beats, but all too often, stages just throw a multitude of drive-by enemies at you, and the challenge comes from fighting the controls to stave them off.

And while the presentation shows you a digestible glimpse at Albion in-game, other presentation elements look muddy and overly compressed. The Journey’s motion comic scenes convey the story cleanly, but other cinematics simply look muddled. It’s noticeable in several cutscenes, and is a distraction from the rest of the experience.

Fable: The Journey is a game that should deliver magic, but instead, the spell fizzles. It offers engaging moments, such as the bond with your equine partner, a simplified glimpse into Albion that provides color and context to the core games, and glimmers of motion-controlled greatness. Unfortunately, even with multiple calibrations to Kinect, it’s an uneven game that feels less inclined to reward skill and more inclined to favor random flailing. If the game’s combat felt more precise, and other motion-based gameplay were more diverse, it’d offer up an excellent yarn. In its current form, however, it’s largely unsatisfying. If you want to truly experience Albion, you may want to consider other Fable games instead.