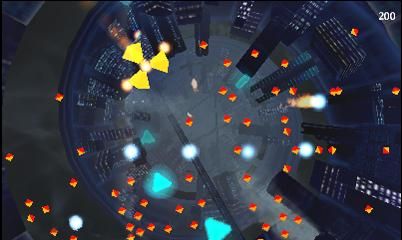 It’s entirely likely that you will hate this game during the first hour of play. You might decry its difficulty, you might scream at the chaotic nature of the gameplay, and you might curse its novella of a tutorial. It will be frustrating and problematic. Much like a new puppy bought without your consultation that won’t stop crapping on the floor, though, you’ll probably eventually see something redeeming in the cute little furry creature. However, unlike the puppy, who will eventually demand and receive your unrequited love, Dream Trigger 3D will likely become just a game that you don’t necessarily hate.

Dream Trigger 3D is a shooter, but it’s unlike any shooter you have ever played. It’s a bit of a cross between Rez and Lumines, with a heavy dose of bullet dodging thrown in for good measure. Here’s the twist: the game doesn’t actually show you the enemies on screen. Instead it presents them as intermittent flashing lights on the top screen, with corresponding colored cubes on the bottom screen. In order to reveal the enemies on the top screen, where they can be destroyed, you must place a sonar marker near the enemy on the bottom screen. Once the marker is in place, it will be activated by a Lumines-like vertical line that travels across the screen in time with the music. Once that line crosses the dot you’ve placed on the bottom screen, a ripple of sound emanates revealing any enemies nearby it on the top screen. From there, you can hold the left or right trigger to activate your weapon, and go on a collision course with the new revealed bogey.

The previous paragraph is incredibly confusing for anyone, including us, and we actually wrote it and played the game. Dream Trigger 3D is simply not an easy game to grasp initially, and the tutorial doesn’t do you any favors. There will be a moment though, when you suddenly get it, and then the game gets interesting.

The Rez comparison comes into play with the constantly changing visuals and trance audio. Each level, though structured the same, looks different. The icon representing your character is always changing, the enemies are never the same and there is always something different going on in the background. The backgrounds are often the element that takes the best advantage of the 3D effect, but it is not the only thing.

One of the most interesting things about Dream Trigger 3D is the way the stereoscopic 3D is utilized. It’s a game that looks best in 3D, and one than can really only exist on the dual-screen platform, making it the very definition of a 3DS exclusive. Along with the often mesmerizing backgrounds, collectible powerups move through the gaming plane along the Z axis, from backward to forward, only being available to grab when they are on the same plane as you. This means you will see powerups moving toward you from the background and past you into the foreground if you miss them. One of the coolest effects, though, is an enemy attack shooting rings of fire at you from the background. You can see the ring looming toward you, and you can tell exactly when it is safe to move into the middle of it. It’s a great effect, and one of the first to use the 3D in a functional gameplay-inspired way.

The only problem with the 3D is that since the game requires one hand on the circle pad and one hand using the stylus, it’s hard to maintain the 3D sweet spot. You’ll be constantly and inadvertently tilting the device. Luckily the game can be very easily played in 2D, but then you miss out the burning rings of fire, 3D backgrounds and powerup effects.

Dream Trigger 3D is one the best uses of 3D on the handheld, but that does not save the game from its other problems. The game, in general, is confusing. The actual act of discovering and shooting enemies is not intuitive in any way, and even traveling between levels requires navigation of an expanding spiderweb maze. To move between any level requires the use of earned points, and with each defeated level, the choice of levels expands in a number of non-linear directions. We were never quite sure where to go, and even though the points to spend were plentiful, there was always a tinge of regret to purchasing a new path, just in case the other direction might have been better.

Dream Trigger 3D will find an audience. It’s an original title with a level of difficulty and required accuracy that some gamers will absolutely adore. The selection of 3DS games available on or near launch have been lacking, to describe it politely, and Dream Trigger 3D is different, and was truly designed for the handheld. It has an interesting techno-inspired visual style and foot tapping trance music that falls in rhythm with the gameplay, and even though the mechanics are novel, it’s just too damn confusing to be welcoming to everyone. If you’re willing to spend some time with it though, you may just find yourself struggling to put it down. We only wish that the picking up part was a little easier.