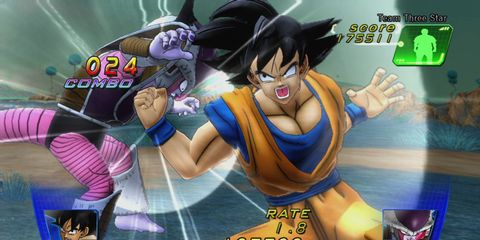 For followers of the Dragon Ball Z franchise, there could be no greater fan service than the ability to physically reenact the dire, potentially world-destroying battles the series is famous (some would say infamous) for. Dragon Ball Z for Kinect approximates the sort of schoolyard make-believe one might have seen among the '90s-era, Cartoon Network set who are now grown up and, presumably, the ideal audience for this title--insofar as it's an over-exuberant, exhausting experience with not much in the way of staying power.

A first-person fighting game controlled, naturally, via the Kinect motion sensor, Dragon Ball Z for Kinect takes you on an abridged tour of DBZ history, focusing on the major one-on-battles of the series. Players punch, kick, block, and shoot fiery ki blasts as mainstay characters like Goku and Vegeta, while facing iconic Dragon Ball Z foes such as Frieza, Cell, and Majin Buu. The title also sports a score attack mode, allowing you to replay campaign battles as any of several unlockable characters and character variants; a boon for superfans, as this lets you control some B-side brawlers such as Raditz, Captain Ginyu, a Saibaman, and Nappa, aka “Mr. Over Nine-Thousand.”

Unfortunately, despite the clear attention to lore, and the inclusion of so much of the Dragon Ball Z rogue’s gallery, the real foe in Dragon Ball Z for Kinect is the same enemy which often plagues Kinect titles: responsiveness. An issue in any fighting game, the problems of timing maneuvers and reacting to threats are especially noticeable with the Kinect motion sensor.

Basic punches and kicks are generally detected, but try anything more complicated and you run the risk of dropping the pugilistic beat. Dodges--executed by leaning left, right, forwards or backwards--invariably work just long enough to lull you into a false sense of confidence. Powerful finishing moves--flashy fun in early stages, but fully necessary for victory by the second half of the game--are even more of a gamble, often requiring the subtlest of motions in order to be distinguished from your regular martial arts repertoire. (Blessedly, you spend much of the campaign as Goku, whose iconic “Kamehameha” telegraphs nicely.) Even a barrage of ki blasts--the basic form of attack when an opponent is at far range--is derailed by the slightest eccentricity in form.

Obviously, in any Kinect-based game, missed signals are a problem. But in a fighting game, and one that relies so heavily on chaining moves and unbroken combos, it's especially troubling. For example, a charged up power attack at close range lets you break an opponent's block and execute a chain of attacks--the key being that usually one of your four possible moves is unavailable, and that if your opponent guesses which move you execute next, they'll break the chain. This mechanic makes scoring a full combo challenging, but not impossible. However, add in even some infrequent missed motions, and a completed combo attack becomes a rare sight indeed.

And those finishing moves? On top of the fact that many require barely perceptible motions, they're powered by an energy bar which, in turn, can only be filled (slowly) via another tricky move. Specifically: the classic Dragon Ball Z “charging up while twitching and having a conflicted internal monologue” stance. This uncomfortable squat must be held, perfectly and continuously, to charge your energy bar; the smallest deviations result in the move continuously restarting, netting you negligible power and leaving you open to any number of attacks.

To be fair, Dragon Ball Z for Kinect does capture the sheer intensity of a Super Saiyan fight. This is a game that, played long enough, will leave you sore and sweaty, yet surprisingly proud of yourself for having lasted as long as you did. Fights drag on, and fittingly so considering the source material. But when your inability to put a foe to bed is due not to particularly cunning tactics on their part, but a lack of precise control in a game that asks for precision, it becomes hard to tell the difference between a battle that's epic and one that's tedious.

Dragon Ball Z for Kinect is more a curiosity than a game, and even then one specifically aimed at DBZ fans. The one-two punch of nostalgia and novelty is appealing for a while, but thanks in large part to shoddy motion controls, later rounds will leave you waiting for a haymaker that just never comes.