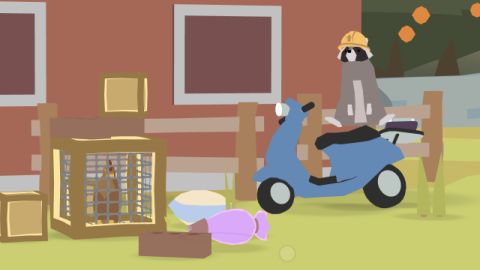 The perfect way to pass a couple of hours, but it will leave you craving more game and a box of Krispy Kremes.

Just like a real donut, this cute little puzzle game is delightful to look at, delicious to devour, but is finished far too quickly. It taps into to the same drive to destroy and grow that the Katamari Damacy games cornered 14 years ago, but always leaves you wanting more.

That's actually a compliment to the artwork and game design of Ben Esposito - the developer who created the game - whose pastel world full of French Bulldogs, raccoons and quirky characters could spawn a thousand stickers and cute t-shirts. The gameplay is simple, you control a hole which grows as things fall in, so you move it around the different levels until everything is gone. Sometimes a puzzle will need you to think about more than just gravity, like swallowing up fire to lift a hot air balloon or burn a tree, capturing a snake to scare a chicken, or using catapult function to fire objects back out of the hole. Water presents a particular problem, swallow up a puddle and - ooh physics - you'll have to find a way to... god there's no other way to put it... drain your hole before you can get back to destroying everything in site.

There's no denying that moving your portable abyss across the different terrains -sucking up ponds, lizards,  trees, mopeds - is incredibly satisfying, and I enjoyed every level I played. It's a zen experience too, there's no way to fail a level, no time limit or score, the level only ends when you've gobbled up everything in sight. It's a two-edged sword though, because while everyone needs a break from stress right now, the stakes are so low that an ant could stub their toe on them.

The game is being released on PS4, PC and iOS, and definitely leans more towards a - *puts on business man suit* - 'premium mobile experience' in terms of the amount of content, and that's reflected in the price. It's just $5 on iOS, and I've spent more than that on iMessage stickers that look like my dog. On Steam and PS4 it'll cost you $12.99, which still feels reasonable, but it's worth knowing that the 'moving a hole mechanic' is perfect for touch screens.

If you were wondering why a raccoon called BK was responsible for a whole town falling into the bowels of the earth,  Donut County has strange story line about drones, BK and his Trash King boss that's just weird enough cut through the game's toothache sweet aesthetic. Unfortunately it's  also to blame for a weak sauce ending where the game's killer mechanic is wedged awkwardly into a boss fight scenario that's neither challenging enough to feel worthwhile or interesting enough to surprise you. It feels a little rushed, the equivalent of running out of time on a homework essay and just scribbling "in conclusion" and copying off your mate.

Even though I have the demeanor of a racehorse with PTSD, I'd have swapped the boss battle for a ticking countdown on the other levels, a score, something to beat. I remembered the size requirements of Katamari Damacy, the levels I didn't finish on time, the ones I went back to repeatedly, always finding new things to roll up. It's not a fair comparison of course. It's a lot to ask from an indie developer, even one as talented as Esposito, to create an endlessly replayable game. But then one donut is never enough is it? Grab Donut County, settle in for a couple of hours, and enjoy it for the short and sugary delight that it is.

The perfect way to pass a couple of hours, but it will leave you craving more game and a box of Krispy Kremes.