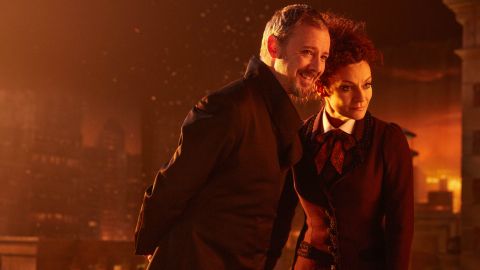 As far as character development goes, for a season finale you can't get much better than this. Make sure you have tissues handy.

And so we come to the final curtain. The Doctor Falls is a bold title for the last episode in the series, and sets the stage for an hour’s worth of shining character performances. The plot of this week’s episode is fairly predictable, with the cybermen turning on the Doctor, Missy, and the Master in a last-ditch attempt to annihilate any opposition to their upgrading schedule. Yet such a simple premise allows for each character to get the ending they deserve in a finale that throws out cheap cliffhangers and revelations in exchange for closure. Rare, precious closure.

As the sun rises on a fresh new day in the countryside, the birds are singing, children are getting ferried to a cheerful outpost in a ramshackle wagon, and there are corpses in white gowns with tubes coming out of their cloth masks strung up like scarecrows. No, really. It’s a pity that no real explanation is given for these low-tech cybermen being replacements for the typical straw-stuffed dummies usually scattered over ye olde countryside. They do, however, do a good job at telling you you’re entering a level of the previous episode’s spaceship where the cybermen are a known entity, and that they’ve been invading in dribs and drabs for some time now.

Literally waltzing on top of a burning hospital, it’s one hell of an introduction to Missy, and the Master. Tied up and taunted by the two (or should that be one?) Time Lords, the Doctor isn’t happy. The group’s arrival at the same idyllic (ish) level is rushed to say the least. Bouncing off each other like a married couple, Missy and the Master’s bickering is a treat to behold and starts the story off with the kind of chaotic pace it needs to continue from the previous episode.

Granted, the Doctor’s tweaking of the cybermen’s targeting systems to zeroing in on two hearts instead of one is ingeniously simple, but the suddenness with which the Master and Missy turn to him for help is disorienting. As is Nardole’s lack of any mourning or shock when the pair tell him the the Doctor has died down there in the cybermen onslaught. It’s very obvious that the minds behind the episode just wanted to get the key characters to the countryside as quickly as possible, and skipped over any semblance of tension or pacing in the first 10 minutes in order to do it. Strangely enough, I’m okay with that. Because it’s here where all the best bits happen: where you get to see inside the minds of Missy, the Doctor, and Bill as each take a journey towards what is, without a doubt, the pinnacle of their character arc.

Aside from the weird transitions between action and inaction, the character’s trip to the country is one of introspection. With oddly-paced preparations for the hordes of invading cybermen to save the aforementioned children somewhat disturbing the pacing, Nardole is the only one left out of this character arc trend. Yet it’s made up for in the fact the we get to see a glimpse of what it’s like inside one of Doctor Who’s most famous monsters.

Poor Bill. She’s still a cyberman thanks to last episode’s outstanding twist. Now comes the time for her to realise what she’s become. Initially I was foolish enough to think the Doctor has ‘cured’ her, as Pearl Mackie is back as her human self, wondering why everyone is so scared of her. Interspersed are brief moments where we see her in metallic form, spitting out the words in that chilling, cold mechanical voice that she yelled emotionally only seconds before. It’s heart-breaking. Seeing the direct contrast between how she’s perceived and how she sees herself forces you to realise how trapped Bill is. Imprisoned in the wrong body, the tear ducts in the modern cybermen are suddenly more meaningful than ever - a feeling we’ve not seen since Yvonne Hartmann (from Tennant’s first season) fought her programming to die for Queen and country. For Bill there’s no going back - something that season after season of Doctor Who has taught us is possible, thanks to its record with resurrecting beloved companions (I’m looking at you, River Song). It’s a bold, brave decision on the behalf of the writers, and demands respect.

Alongside Pearl Mackie in terms of acting prowess has to be Michelle Gomez as Missy.. The Doctor’s plea for the two Masters to just be kind is well-intentioned, but it shows that despite all his intelligence he really doesn’t understand their psyche. However, Missy knows she’s changed. It scares her. So she resorts to callousness in order to protect herself - and you can see all that going on in Gomez’s performance. Through a downcast look with her eyes and thanking the Doctor for trying, you see everything that’s going through Missy’s warped mind. Later on she shines in an exquisite scene between her and the Master that shows how it feels to be bad with the immortal line “I remember how it felt to burn like the sun - and I will always miss it”. She doesn’t burn like the sun anymore. She’s truly good, but doesn’t get the chance to show the Doctor how she’s changed, as the Master shoots her dead. Without hope, witness, or reward - Missy’s idea of goodness is one of the last things the Doctor says before he throws himself into battle. The futility of it all is bittersweet. Although Missy doesn’t get to stand beside the Doctor and help, he’s still thinking of her. She helped him, even though she’ll never know it.

And finally, the return of Heather makes this last episode perfectly cyclical. “A different kind of living” awaits Bill now she’s with her girlfriend at last (the gay onscreen kiss is definite air-punch moment too). Having Bill’s almost last line as “I’ve been through a lot” initially makes you think that she’s going to ask Heather to take it slow, but really it’s the opposite - it’s a show of strength. Bill is taking the lead on the new adventures now: she’s no longer the student but the teacher. She’s learned. She’s grown. She’s ready to have her own adventures, and it’s about damn time too.

Likewise, the Doctor isn’t ready to hang up his sonic screwdriver. This time he really, honestly does not want to change. Mind you, the turmoil about changing your entire character is utterly understandable. And who should arrive to help him along the road to acceptance but the First Doctor. I can’t express in words how exciting it is to see David Bradley return as William Hartnell (check out An Adventure in Space and Time to see his outstanding performance). Things are going to get deep in the Christmas episode, and the wait till December now seems longer than ever. A couple of misses gave this season a tiny blemish, but overall it’s been a rewarding journey that’s broken the cycle of overcomplicated companions and timelines, instead giving us the staunchy realistic Bill and a refreshingly imperfect Doctor.

As far as character development goes, for a season finale you can't get much better than this. Make sure you have tissues handy.