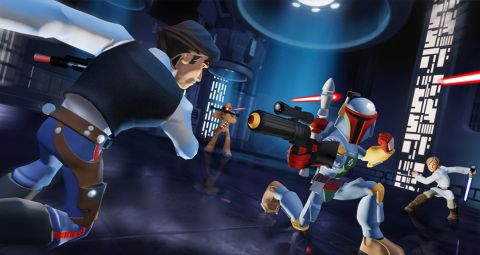 A potent nostalgic mix, but despite improved combat, older fans will likely be left bored.

There’s a real temptation to don my cynical hat while booting up Disney's latest contender in the behemoth toys-to-life genre. Its opening sequence (read: glorified advert), in particular, raises an eyebrow – highlighting game worlds you can’t access without shelling out for more playsets and figures. And yet, it's hard not to crack a smile as the Millennium Falcon blasts TIE Fighters out of the sky, Darth Maul emerges from the shadows lit up by the sheen of his dual-bladed lightsaber, or Inside Out’s cast bound through a typically colourful Pixar world.

While Disney sure knows how to milk every last drop of pocket money from its fanbase, it's also aware of how to entertain 'em in return. This time around, that base grows to include Star Wars fans. Bundled with the starter pack are figures in the form of Hayden Christensen-era Anakin Skywalker and plucky Padawan Ahsoka Tano. Also included is the Twilight Of The Republic playset, which unlocks a Clone-Wars-era romp through familiar locales, alongside familiar faces (some are welcome; some are Jar Jar Binks).

The lightsaber-based combat, which makes up much of your playtime, is incredibly satisfying, and through the short campaign new enemy types are regularly introduced to thwart button-mashing tactics. Combat plays like a faster, simpler version of the Arkham games, with cape stuns replaced by force powers and armour-breaking combos swapped for shield-disabling aerial strikes. It’s never taxing, but there’s enough challenge to keep tedium at bay.

The same can’t quite be said for much of the periphery action. Pod racing is too simple and one-note to be truly enjoyable, and the space battles can only muster a weak facsimile of the Star Fox games they ape. Variety is, of course, welcome, but the combat being as refined as it is only serves to highlight the mediocrity of everything else.

For many, the main campaign will be done and dusted by the five-hour mark, and though there are plenty of side quests to mop up, they’re almost all formulaic fetch quests/escort missions/'kill these enemies' challenges. It whiffs of padding, and with little tangible reward for completion, only the most ardent fans will see fit to bother. That leaves the returning Toy Box mode to keep players entertained, and your enjoyment here largely depends on how creative you are.

With time and effort you can construct some truly bizarre mash-ups of Star Wars, Marvel and Disney universes – I made a bowling mini-game with a Pizza Planet van acting as the ball, and pins made from unsuspecting NPCs (with Jar Jar Binks at the front, naturally). For the creatively impaired, you can hop online and try out some of the creations made by other users, and while the servers are dominated by levels made by the Disney Infinity team at the time of writing, I'm expecting some brilliantly creative lunacy from fans in the coming months.

I doff my cynical hat to Disney for creating the kind of fun, well-made kids game that barely existed mere years ago, but in terms of appealing to older gamers, Infinity remains a step behind.

This game was reviewed on PS4. A version of this review appeared in GamesMaster magazine.

A potent nostalgic mix, but despite improved combat, older fans will likely be left bored.

Alex Jones
That terrifyingly smiley chap in the photo there is me, Alex. I’m a GR+ freelancer and share my name with both a welsh lass off the TV and an American conspiracy theorist. Thanks Mum and Dad…
See comments
Gaming deals, prizes and latest news