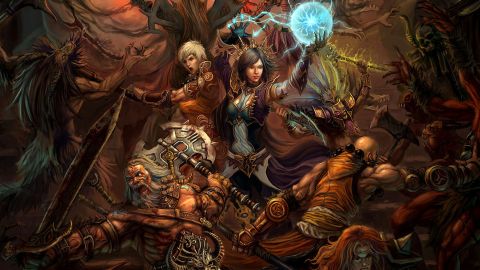 Some genres are defined by their ancestors. Doom begat the first-person shooter, Grand Theft Auto begat the open-world game, and Diablo begat the hack-and-slash RPG. But unlike the others, the hack-and-slash still carries the moniker of “Diablo clone,” nearly 20 years after its creation. And for good reason--while games like Torchlight and Titan’s Quest made slight modifications to the formula, they’ve still treated the genre as “Diablo” instead of a standalone idea. Each game iterated on the Diablo concept, making changes that served to supplement the tropes instead of attempting to reinvent them. In many ways, Diablo 3 approaches the genre in the same way--it’s essentially a good Diablo clone. But thanks to the 2.0.1 update (which released in late February, 2014), it has finally become the game many had been hoping it would be from the start.

At its core, Diablo 3 is a game about clicking on stuff until it dies, stealing its loot, and leveling up. It’s been dressed up in beautiful graphics, garnished in stellar physics, and turned into a persistent online game, but these are mere supplements to a largely unchanged formula. Many of the tweaks from its 11-year-old predecessor. There are some large modifications to the formula, but many of the changes from its 11-year-old predecessor are basic quality-of-life improvements, leaving the core as classic as can be and retaining the same addictive, repeatable, enjoyable gameplay that had us hooked for hundreds of hours back in 2001. Though Blizzard made great strides to assure that the mechanics fit more in line with 2014’s standards, it did so without sacrificing Diablo’s essence.

The gameplay--that’s the “clicking on stuff until it dies, then leveling” part--is simplistic and satisfying. Despite sporting insultingly bad dialogue and a forgettable plot, the act of beating on bad guys with the mouse pointer and watching them ragdoll around is the ultimate power fantasy. Playing through the game’s four acts fulfills primal urges, and taps into the same pleasure center that other loot-fest games have in the past.

Each of the five classes give yous different ways to click bad guys to death, allowing players to bash in heads as the Monk, blast foes with elemental spells as the Wizard, shake snakes at enemies as the Witch Doctor, cleave through waves with the Barbarian, and fire barrages of arrows as the Demon Hunter. Each has a varied moveset that makes it feel different from the other classes available.

Diablo? On consoles? It's more impressive than you'd think--many of the amazing changes that eventually came to Diablo 3 via patches began their lives in the console version, including the upgrades to loot that totally fixed the itemization problems. Better yet, the console versions include local co-op, making the hack-and-slash gameplay all the more personal. Though some were skeptical when it was originally announced, Diablo 3 on consoles is the same experience PC fans enjoyed, modified to enjoy strong gamepad support, and tweaked just enough to make the difference between the two meaningful.

Classes in Diablo 3 progress in a very modern way, both by gifting all of the games’ skills to the player by level 30 (instead of throwing them at a wall of abilities to choose from over the course of 99 levels), and by making six skills available at a time (instead of two). Because of the ability to modify the varied spells with unlockable Runes, the character customization is as robust as ever, even if the level cap is at a much more attainable level 60, as opposed to Diablo 2’s 99. Runes make a huge difference; for instance, they augment the Barbarian’s Bash to include a stun, reverberating knockback, or area-of-effect damage. Every skill is improved with these runes, and it’s possible to create imaginative and unique builds, letting players tune every spell to their liking.

Even when you hit the level cap, Diablo 3's Paragon system provides incentive to keep on grinding. While you'll have unlocked all of the Runes and skills, you'll gain access to Paragon points that can be spent on a wide variety of skills. Paragon levels are shared across characters, but each is able to distribute them in different ways, meaning your Wizard can spend all of her points on offense, while your Barbarian can focus on raising his health. It gives you reasons to keep playing, and more incentive to attempt to conquer Diablo 3's highest difficulty modes.

Further adding to the customization are the loot drops, which are arguably even more intrinsic to the genre than the RPG elements or the combat. Randomized items tumbling from the corpses of fallen foes help fuel the urge to continue playing, allowing players a second outlet for which they can continuously iterate on their character’s stats, replacing different bits of armor and weapons with slightly better ones. It’s rewarding, and thanks to the closure of the Auction House and the "Loot 2.0" update, it's everything Diablo fans want from itemization. While previously focused on forging an economy where you'd find a near-infinite number of bad items, the new system is more rewarding, and will give you items you actually want to find.

Buying items on the Auction House basically ruined the Diablo 3 that shipped on PCs in 2012. Purchasing items off the AH was quick and simple, and, in a way, made finding loot meaningless. Every item we picked up from enemies we’d slain was insufficient to the one we nicked off the AH for ten minutes worth of gold. It broke the genre, but now that it's gone, the new loot system is exactly what everyone wanted at launch. You're swapping out gear every few minutes and finding new things to equip. Every so often you'll find a Legendary item and--surprise--it'll actually be awesome.

And now that Blizzard has had time to stabilize the online systems since launch, there are few instances of downtime. Lag is still a problem--and will likely continue to be as the game's popularity rises--but the online system is easy to use, and makes finding games with strangers effortless no matter which difficulty you're on. You’re able to search for people on the same quest as you and join them instantaneously, which makes it a breeze to find groups for difficult sections; even playing with friends has been streamlined and simplified. Those who want to play alone can do so with no pressure to join with others, but it’s just as easy to make sure you’re always running around with two or three party members. Since the game scales amazingly well to the number of players in a game, it means that online multiplayer will always provide an adequately awesome challenge for everyone involved, especially on the harder difficulties.

In the 2.0 update, Blizzard also revamped how difficulties work--gone are the days of Normal, Nightmare, Hell, and Inferno, replaced with a new scaling system that's much more transparent. There are still four "core" difficulties that scale monster levels and toughness (and, obviously, reward), but added to the end is Torment, which has six difficulty levels of its own. These new modes are harder, but more fair than the ones the game shipped with, and should keep you playing for an additional few hours as you attempt to topple Diablo.

The changes that came with the 2.0 patch transform Diablo 3 into something far more enjoyable, and with much longer legs than the game had at launch. It might not hook you for as long as the original did, as the grind to higher Paragon levels still lacks the inherent joy in climbing towards level 99, but it's still an extremely fun game, and a worthy successor to the Diablo throne.