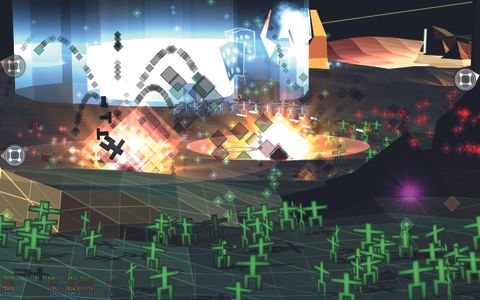 Life, reckoned Lord Attenborough in Jurassic Park, finds a way. It’s a maxim which holds true for Darwinia+’s little computer people who have grown complete virtual lives within a computer simulation, only to be pushed to the brink of extinction by a computer virus. Recruited by the creator of Darwinia, it’s your job to eliminate the virus with real time strategy, digital weapons, and brain-tickling programming clout.

Darwinia is a world hewn from massive polygons, while the Darwinians themselves are paper-thin pixel men that walk like a saddle-sore John Wayne. Bombers are space invaders and viruses are literal computer worms which spread and multiply across the world. It’s a lo-fi and stark place but one that’s visually arresting and immediately recognisable from any 80’s vision of cyberspace.

Covering the middle ground between strategy and action, your role in each area is to extinguish virulent enemies with squads, collect their souls with engineers, and then transform them into Darwinians. The Darwinians can then operate generators, mine for raw materials and spread your influence across the world. It’s very simple yet endlessly intricate and inventive, actually coming close to coining a new genre in the process.

This package is actually two games in one, the second being Multiwinia+, a series of multiplayer modes. While we couldn’t test it against other human players, there’s a huge amount of promise in its clever twists on standard modes – King of the Hill, Capture the Statue and so on all feel like they’ll find a place on Xbox Live.

The real boon of Darwinia+, however, is the care and attention that’s gone into this port. Controls are wonderfully intuitive, with sensible button shortcuts and the welcome addition of direct controls for squad units, briefly transforming the game into a twin-stick shooter. In fact, this just might be better than the PC original; vindication for a troubled port process and proof that, with the right amount of effort and the right subject matter, a PC-based RTS can work on 360.