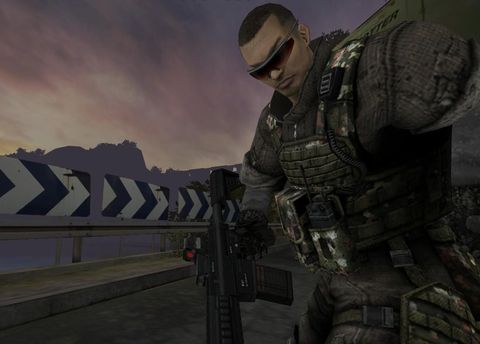 I’ve played plenty of Counter-Strike clones in the past nine years, and none have duplicated the original’s addictive gameplay style, perfected map design, and balanced ballistics. Combat Arms is no exception, even though it visually resembles the four-year-old Counter-Strike: Source. It does have one advantage, however: it’s free.

All you need to play this team-based multiplayer shooter is broadband Internet and the 445MB installer, which includes six maps. The four gameplay modes will be familiar to any fragging veteran - the Deathmatch, Team Deathmatch, Capture the Flag, and Search & Destroy games aren’t anything special, but the maps are designed well enough to accommodate multiple routes, choke points, and sniper decks for different play styles. Combat leans more toward fast-paced arcade action than tactical realism, with glaring, arcade-style notifications popping up on your HUD for kill streaks and headshots, and the game does nothing to discourage obnoxious bunny-hopping.

Where Combat Arms deviates from the CS-clone formula is its persistent economy. Scoring kills and winning rounds earns you currency that can be used to acquire new weapons and equipment for use in future games. I also liked that weapons aren’t bought, but rented; limiting my use of a new weapon to a week (or more if I paid real money) forced me to make tough decisions. Combat Arms also makes its money through microtransactions, though they’re all purely cosmetic, thankfully.

Combat Arms may be a pale imitation of Counter-Strike, but it’s a free pale imitation. It’s a good place for casual shooter fans who don’t feel like dropping $20 to get the crap kicked out of them in CS.