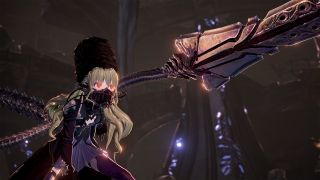 Bandai Namco's bite-'em-up wants to bring all the long-forgotten vampiric original characters of your early tweenaged nightmares to unlife at long last. An impressively granular character creation system allows you to finely tune the appearance of your resurrected Revenant. You can combine a number of hair style parts to create that purple-tipped, twin-tailed 'do you've always wanted or tweak the facial features of your fanged protagonist for that freckled and scarred, cute- but-dangerous look.

This opinion first appeared in Official PlayStation Magazine. Get the latest PlayStation news on your doorstep early and for a great price! Subscribe to OPM here.

You can layer outfit parts from a selection of improbable accessories, from tiny hats to coffin-shaped bum bags, and even a throwback to those fingerless gloves from Claire's we were all rocking back in the early '00s. And yes, you can even give your character heterochromia if you want to, though we’d advise against making your default eye colour any shade of red as your character’s eyes glow this colour during important story moments. We choose a tatty, belted-bondage-looking-bodysuit to round out the Edwina Scissorhands vibe we’re going for, and a disembodied voice comments, "Sure, that’s what you look like..."

But while you're dressed, you’re not ready to find your worth in the waking world just yet, sunshine. The disembodied voice reveals herself to be the mysterious Cruz. Early details released last year suggest she's a villain but here she patiently guides us through the basics of combat. Fighting requires you to maintain a delicate balance between getting hits in and managing your stamina. You have both heavy and light attacks across a wide range of weapons that you wield against a range of (often sneakily placed) enemies with predictable attack patterns you need to watch closely. If you mess up your timing you’ll be sent back to a Mistle checkpoint and have a limited window to retrieve your experience and currency from the spot where you died. So far, so Souls-like, then, but Code Vein adds its own wrinkles to this formula.

Blazing its own path forward

Cruz tells us we're special among vampires because we can use more than one Blood Code. Not entirely dissimilar to Persona protagonists' Wild Card ability or the job system of many a Final Fantasy, this means you can freely chop and change between a number of combat specialisations. Each Blood Code adjusts your stats and grants you access to a selection of vampiric powers called Gifts. For example, a late-game magic user Blood Code lets you shield yourself and your comrades-in-blood as well as perform a nifty trick that, with a bit of practice to get the timing down, can send out a shockwave that knocks enemies back. Gifts are accessed on R2 [on PS4] and can be used to heal your AI partner, hurl projectiles at enemies, temporarily raise your base stats, and much more.

In addition to your Gifts, you have a number of equippable Blood Veils. To use your Gifts, you need Ichor, which naturally you drain from enemies. Your Blood Veil is vital equipment for this task, transforming into a strange mechanical claw, and can also be used for flashy attacks.

After Cruz has walked us through these facts of our newfound unlife, we finally swing into action, waking up in the comfort of our amnesiac companion Io's lap. And that's all the luxury this jagged, ruined world offers. Possessed by a sudden thirst, Io gently guides us to a withered tree that is revived by drops of our special blood. The tree sprouts Blood Beads, the only thing that can quench a Revenant’s constant thirst. In this part of the city, few humans remain. After a battle against a great enemy only referred to as the Queen, an impenetrable red fog called the Miasma encircled the city and made some areas within it particularly inhospitable to Revenants. If you're caught out in the open without a gas mask, the atmosphere can drive you mad with blood lust. This is the fate that befell every enemy you fight, known collectively as the Lost. As we face a former teammate who can no longer be reasoned with, we’re told that those who become Lost to blood lust can never be brought back.

Well, that's not strictly true. All Revenants are given unlife thanks to the BOR parasite, and this is what keeps them coming back after every defeat. But after every resurrection, Revenants lose a bit more of their past life (though you woke up with
no memories at all). How fitting it is, then, that the Revenant with the special blood and no past that they can recall can view the memories of particularly powerful Lost. You’ll be able to uncover the rest of the mystery later this year.