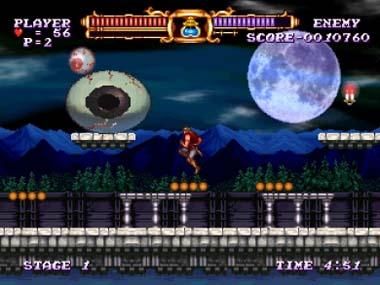 This isn’t a spruced-up port of the NES original, nor is it a remake of its Game Boy namesake. Instead it’s an all-new Castlevania designed to emulate the style of the series originals and made to look a little bit like the SNES’s Castlevania IV. Which makes for an odd combination, truth be told.

It’s an approach that means ReBirth doesn’t look particularly nice (it’s rooted firmly in 16-bit style – not that that’s any excuse) and plays just like a traditional NES action platformer – rigid and unforgiving. Christopher Belmont shuffles his feet across the floor like a geriatric power-walker, pumps his arms like he really means business, and couldn’t be less agile if you duct-taped two hardback copies of Bram Stoker’s Dracula to the backs of his knees.

Mercifully for old man Belmont, Dracula’s castle isn’t as sprawling as it was when the series made the jump to PS1 and people started bandying around fancy words like ‘Metroidvania’. There are no winding multiple routes, no need to backtrack and none of this, ‘can’t get to area X until you’ve got weapon/magic Y’ business.

ReBirth is, by and large, a shuffle and arm pump from A to B across each stage before facing off against a boss. Every now and again you’ll stumble across a branching bit, scenery-destroy your way to a secret or (gasp!) you need to find a key to open a locked door, but that’s really about as complicated as things ever get. Anyone looking for something as sophisticated as Symphony of the Night, or who has dabbled with Portrait of Ruin and fancies more of the same, is going to be sorely disappointed.

But then we guess that’s the whole point, isn’t it? This is meant to be a tribute to the series’ past – a pixely ‘treat’ for anyone who gets inexplicable goosebumps when a 16-bit sound chip parps out remixed tunes that they vaguely recognise. If you can confidently slap a Post-it saying ‘That’s me!’ to your forehead, then jump right in – Konami have managed to get the classic look and feel absolutely spot-on, with brooding signature tunes and suitably gothic, grubby environments as backdrops to the unremarkable action. More importantly though, if you’re looking for a straight-up old-school challenge a la Mega Man then you’ll definitely find it here.

The opening couple of stages are a relatively easy ride, but by the time you hit the third, things start getting more brutal. Pixel-perfect jumping, split-second timing, not to mention the kind of moving-platform- and bobbing-enemy-skipping that’ll tax anyone without the memory and foresight of a Ukrainian chess champion.

We’d be lying if we tried to say that, in some small way, ReBirth wasn’t an enjoyable or, at points, even compulsive game. But given that the Wii, and Virtual Console in particular, isn’t short of better examples of classic platforming action, you’ll need to really love your ’Vania to get the most out of this.