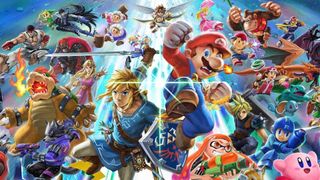 The arrival of a new Super Smash Bros. Ultimate fighter is a serious business and can inspire the kind of passions that have started wars. We decided it was our duty, nay, our privilege, to humbly put forward our own suggestions for the next addition. Did we get it right? Put it this way, one of our suggestions is a bird.

No, not Anthony Edwards' character from Top Gun, but Untitled Goose Game's (un)titular protagonist. We know that House House' already iconic gander is always up for a fight, and their limited range of attacks could easily be fleshed out by Nintendo for the Smash pro circuit. Honk stuns, bell throws, wing-based AOE attacks... the Ultimate team would barely have to do anything to make Goose a perfect fit among the current roster and - let's be real - a "New Challenger" announcement of that kind of 'OMG' variety is every marketer's dream. This passive aggressive passerine has already broken the internet once. Give them to Nintendo, and let's break it all over again. Alex Avard

Yes, more swordplay. You can moan all you want about the addition of another swordsman, but Geralt of Rivia can also make hand signals that do magic so jog on and let me have my fun. Who wouldn't want to watch Geralt cast Aard and yeet Kirby off of a map? Perhaps his special would involve Roach dropping on top of someone's head? Or maybe Yennefer can pop in and be all hot and scary and mean and just...intimidate people to death?

Despite its size, The Witcher 3: Wild Hunt was a surprisingly functional port for the Nintendo Switch, and bringing Geralt into the world of Super Smash Bros. Ultimate has never been more timely. We're still in the midst of a Witcher Fever: everyone's got a slight temperature and the echoes of "Toss a Coin to Your Witcher" stuck in their heads. Capitalize on it, Nintendo, and give the people what they want. Alyssa Mercante

It doesn't even matter which one to be honest. Except maybe not the little dog one who's scared of fire because that's just mean. No, I want one of the really big ones, like the giant with a sword hand and face like a surprised hairy coffee pot. The idea being that the player is both a fighter and the level [MindBlown.gif]. Okay, there are some kinks to work out. Like how you stop everyone just punching whatever bit of floor they’re standing on to defeat you but Masahiro Sakurai strikes me as the kind of guy who gets what he wants so I don’t have to win any of you over, I just have to convince him. Leon Hurley

Another swordsman, I hear you sigh. A) Those are keyblades, damnit. Big difference. And B) Shush. It’s my pick.

Sora would be the best choice to kick off the second Fighter’s Pass: As the Kingdom Hearts lead for closing in on two decades, he’s mainstream enough that pretty much everyone will be universally happy with the choice (looking at you, Byleth), and also has almost unlimited potential with his fighting style.

Can we have Simba fighting by his side on Final Destination? Sure. Mushu cooking Link medium-rare? Go for it. Buzz punching Luigi to infinity and beyond? Abso-freaking-lutely. Let’s ignore all the legal red tape that is probably stopping Sora joining the Smash roster and, instead, embrace all things House of Mouse. Then this can be the first step towards Sakurai making the Disney x Nintendo crossover he’s secretly always wanted. Bradley Russell

It would mean yet another anime swordsman, but I reckon Rex from Xenoblade Chronicles 2 would be a good fit for Smash. We've already got Shulk, the protagonist of the original Xenoblade Chronicles, but Rex could play very differently thanks to the many Blades at his disposal. I'm picturing a Pokemon Trainer-style setup where you play as Rex but you can choose between a few blades which modify his move set. Pyra, Mythra, and [super spoiler story Blade] would be a solid three, and if we're looking for a fourth, I'd vote for Zenobia. His down-air could be a Smash-style spike, his grabs could be based on topples, his Smash attacks could be Specials - it's super cool in my head, not gonna lie. Austin Wood

We’ve had Ryu. We’ve had Ken. Now it’s time to expand Smash Bros’ Street Fighter invasion beyond the realm of dragon punches and garbled shouts of Tatsumaki Senpuukyaku. Step forward everyone’s favorite digital boxer, still known as M Bison in the game’s homeland of Japan, renamed Balrog everyone else in the world for fear of legal reprisals from ear-biting Hangover II guest stars. I’ve always loved Bally for his simple approach to Street Fighter life, which mirrors my strategy for fixing broken electronics: if it doesn’t work first time out, just punch it a little bit harder. An approach that marries perfectly with SSBUF’s fast, impactful, arena-based chaos. Making the choice for the game’s next DLC addition a no-brainer. It must be glove, glove, glove. Ben Wilson

The original star of the Yakuza series has finally retired from the spotlight, which means Kiryu has plenty of time to pummel other video game characters. His standard street brawler moves fill up his Heat Gauge, then he pulls off context-sensitive Heat Actions - grabbing Mario and slamming his face into the pavement, side-stepping Link's master sword and breaking his arm, that kind of thing. Kiryu's Final Smash is heralded with a piercing call of "Kiryu-chaaaannnnn!" as Majima leaps in to beat the hell out of everybody with a baseball bat, leaving Kiryu free to sing sad karaoke in the background. Then there's Kiryu's accompanying Kamurocho stage, which has a handful of citizens - such as adult babies and slot car enthusiasts - who will help you in combat if you complete their Substories. I really need this to happen now. Connor Sheridan