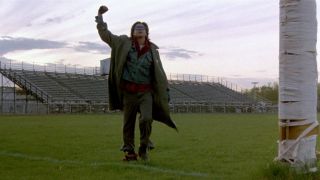 Teenagers. What a bunch of [assorted unkind words]. Ok ok, so maybe they aren't that bad. After all, we were all their age once. We've all experienced the good times (I've got a date!) and the bad (I've got zits, a bad haircut, and no date). Teen movies tend to portray both of these extremes, highlighting the everyday struggles of the nerdy outcast and/or the lifetime highs of the popular jock. It's just like real life! Except the main cast are always about 43 years older than they ought to be, and everyone gets a cracking personal soundtrack, the lucky buggers. This list covers the very best of these teenaged dreams.

With his parents away and the mounting pressures of college interviews and finals, Tom Cruise's Joel decides to call up a prostitute. To alleviate those pressures, presumably. Things spiral out of control pretty fast as the hooker with a heart of gold moves into his house, turning his parents pristine abode into a makeshift brothel. Parties ensue, naturally, and life lessons are learned in an oddly dark way. And, like all ‘80s teen movies, Risky Business includes a montage. This one has Cruise parading around his house in a white shirt, socks, and Ray-bans. He manages to look way cooler than most actual teenagers.

Daniel Clowes' comic book is a darkly funny look at the lives of a couple of teens who aren't popular but aren't outcasts either. It's what makes this film adaptation ring true. Thora Birch and Scarlett Johansson play Enid and Rebecca, a pair of high schoolers on the cusp of graduation. For Enid, juvenile pranks remain a source of endless entertainment. For Rebecca, it's the allure of having their own pad and their own choice of kitchenware. It's when their two views on the future collide that things take an interesting turn. What awaits them in the real world is the meaty part of director Terry Zwigoff's dramedy. That happens to include a scene-stealing turn from Illeana Douglas as Enid's art school teacher.

Based on the novel of the same name, The Perks of Being a Wallflower follows quiet introvert Charlie (Logan Lerman) who navigates the drama of his first year of high school while making friends with seniors Sam (Emma Watson) and Patrick (Ezra Miller). While there is plenty of traditional teenage drama such as dealing with first loves, a lot of deeper issues (such as abuse, suicide, and mental health) are also explored. It perfectly captures that feeling of being a misfit or an outsider at school. The film's most uplifting moments come as this bunch experience the joys of hearing a great song for the first time, cruising through the night without a clue about what the future holds.

Emma Stone's Olive Penderghast is this generation's Ferris Bueller. Where Bueller skipped school, earning the adoration of the entire student body, Olive achieves notoriety in a totally different way. She becomes a social outcast when rumors run rampant that she's a sleazy bed-hopper who'll sleep with anybody. Instead of denying the allegations, she goes with it, letting her classmates earn cred for their supposed sexual exploits. She's a tad more selfless than Ferris, as it's all at the expense of her reputation. Though the film's ridiculously funny, its other elements also feel fresh and modern, including its portrayal of female relationships (Olive falls out with bestie Rhiannon), and the gay kid (Dan Byrd) who just wants to fit in. Plus Patricia Clarkson and Stanley Tucci win the award for the coolest parents ever.

It isn’t one of Quentin Tarantino's favourite movies for nothing. Richard Linklater's film is a bona fide cult classic, dipping into the last school day for a bunch of Texan kids in 1976. It ropes in tons of recognisable names including Matthew McConaughey who makes an unforgettably cool early appearance as a surfer dude. Yep, this is where "alright alright alright" comes from. Aside from McConaughey, keep an eye out for Milla Jovovich, Parker Posey, and Ben Affleck too. Like Linklater's more recent movies, there's a touch of dramatic tension, but it never gets sappy or preachy. Instead it offers a funny, warm look at what high school life is really like for the kids of America.