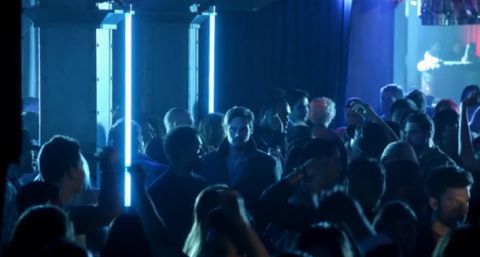 THE ONE WHERE Vincent comes over for dinner. Catherine’s web of bad lies comes unspun as Heather and Police Partner decide Vincent is no good for her. Creepy ME Guy considers joining Muirfield to help hunt down Vincent and Heather’s new bloke turns out to be trouble.

VERDICT It all starts very soapy this week...

We jump straight into the fall-out from Catherine’s sister interrupting the couple’s almost first kiss and Heather recognising Vincent from the wedding a few weeks ago. Catherine ends up bringing Vincent over for dinner and it all goes horribly wrong. Again there’s lots of terrible acting; for a man on the run and a police officer, both Catherine and Vincent are crap at lying, avoiding awkward questions and hiding their reactions. They have terrible, terrible poker faces.

Cue lots of awkward moments, bad lying and Heather not liking Vincent. Heather ends up in cahoots with Police Partner and they look into Vincent’s background and find he doesn’t exist or rather the “Vincent Zolanski” name he’s using doesn’t exist. The very next morning Catherine is dragged into an interrogation room at the police station and is grilled by Heather and PP about Vincent. There are phrases like “emotionally toxic relationship” and oh, God, it’s awful.

Just stop for a minute. Less than a day after meeting her sister’s boyfriend Heather has gone to Police Partner and they’ve run a pretty extensive background check on him. Both Heather and PP come down pretty hard on Catherine. It basically all comes down to telling Catherine that she has to pick Vincent or them. Who are these people?

It’s a really badly pitched scene and both the sister and the partner come across as immature bitches to be honest. We know they might have a point with the things they’re saying – Catherine is secretive and sneaky – but it all comes across as little more than bullying.

Elsewhere the man from Muirfield – played by William deVry and finally given the name Doctor Sorenson – visits Creepy ME Guy. ME knows he’s in over his head but really does seem to want to know more about the cross species DNA creature and it looks like he’s willing to make a deal with the devil to get answers.

Creepy ME Guy later comes to talk to Catherine and reveals he did see Vincent the night of the car crash and he knows Catherine has some sort of relationship with the cross species DNA creature he’s hunting. The events at episode’s end force his hand and he makes the leap to the Muirfield dark side. This could lead to some very interesting places.

During the meal at the start of the show it’s revealed that there was a photo of Vincent and Catherine taken at the wedding. After Heather posts it online, Catherine and Vincent are worried that Muirfield might discover it. Which leads to Catherine and Vincent both taking a closer interest in Heather and Darius. For once Muirfield isn’t involved. But the photo, and who might see it, leads us into a very dramatic and action packed ending for the episode.

The police captain’s brother Darius, briefly seen last week asking Heather for a date, turns out to be a bad ’un. After taking Heather to his club he’s accosted by two men who drag him off. Heather disturbs them and Darius is told to kill her or be killed himself. Vincent intervenes resulting in Darius’ death. The lame background character stuff with police captain Joe and Darius and Heather which we moaned about last week was actually all set up for this. Well done TV show, well done.

This death is big. As we said; Darius is the captain’s brother and Vincent fears his death will make the vigilante hunt become more serious. The claw marks on the body convince Creepy ME Guy to join Muirfield; Vincent saving Heather’s life causes Catherine to finally tell him how she feels. Darius’ death really could be a game changer for the whole show. Let’s hope so.

After some pretty soapy goings on for most of this episode we’re lulled into a false sense of boredom and suddenly everything is redeemed in the last 15 minutes. As we say every week; this show is just far too inconsistent. If it managed to be more like the last 15 minutes all the time, then we’d be huge fans of Beauty And The Beast and we’d want the show to run and run.

STALKER BEHAVIOUR OF THE WEEK Heather and Police Partner running a complete background check on Vincent is way over the top and a little bit creepy.

MURDER DEATH KILL No police case this week. But Catherine’s sister’s new boyfriend turns out to be a dodgy geezer. He ends up being forced to either kill Heather or be killed himself. Vincent shows up to save the day but Darius and one of his associates are killed.

BEST KISS It’s only taken 14 episodes but Vincent and Catherine finally admit that they love each other and kiss. Awww. At the end of such a dramatic episode the kiss comes as quite a shock; we really didn’t know how Catherine was going to react when she met Vincent on the roof at episode’s end. This is the perfect time to have this moment; with everything that happened in this episode there’s going to be plenty of fallout and finally having a united front might just get Vincent and Catherine through it.

WRONG SALUTE NITPICK We’ve let this go for a long time, but it’s right there in the opening montage every week and we’ve finally had enough.

During the montage we see Vincent in army fatigues walking down a corridor with two uniformed men coming towards him. Vincent then salutes. This is wrong. He should not salute.

It’s pretty vague as to which branch of the military he’s in – the voice over just says “special-forces” – but it’s got to be either the US Army or the Marines. The Marines only salute when wearing headgear; Vincent is not. The US Army does not salute indoors unless formally reporting to a superior officer. Vincent is indoors and not reporting to a superior officer, he’s just walking down a corridor. We get that a salute backs up the military feel of the intro but the show-makers could at least check their saluting facts.